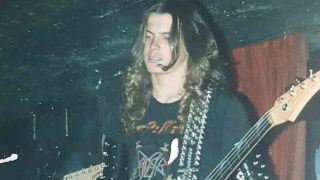 “We were on a mission to be the heaviest band on the planet. And that’s what we were.” – Possessed’s Jeff Becerra

Jeff Becerra invented death metal. Simple as that. And remarkably, he invented it in 1979, writing what would become the first Possessed song – Burning In Hell – at the age of 11. After passing through a few bands as an excitable adolescent, Jeff joined three school friends to form Possessed in 1983. Full of youthful bravado, Jeff and his comrades were united in a desire to push metal into more extreme territory than ever before: faster, heavier, nastier and more intense than even the nascent thrash movement could muster. If Slayer were scaring lots of people in LA, Possessed were hell-bent on being the Bay Area band that could scare Slayer.

“We wanted to do something that was heavier, more crazy and extreme than anything we’d heard,” he says. “There was speed metal and thrash metal and black metal, so let’s call Possessed a death metal band! I wrote the song Death Metal to make a statement, that we were the first to do it. We wanted to be different.”

As British grindcore mob Lock Up once stated on a t-shirt: ‘Seven Churches on vinyl or fuck off!’ Released in October 1985, Possessed’s debut album was one hell of an opening statement. Adorned with the Satanic imagery that Venom had brought to metal only a few years earlier, and sounding like a sustained screech of infernal rage from the bowels of Hades, Seven Churches was instantly hailed as a classic by fans of the burgeoning metal underground.

More than 30 years later, it’s impossible to deny its colossal impact and influence. As Jeff cheerfully notes, the late, great Chuck Schuldiner often cited Possessed as inspiration for his own pioneering musical efforts with Death, and while other bands had a similar impact on the genre’s later evolution, death metal’s entire vocabulary can ultimately be traced back to a bunch of songs written by these San Francisco teens in the early 80s. Seven Churches is where death metal began. And even though Possessed  released two more well-received records before their untimely split in 1987 – Beyond The Gates (1986) and The Eyes Of Horror EP (1987) – it is for Seven Churches that Jeff and co are most celebrated.

“A lot of people feel that way, but the truth is that the second record outsold  Seven Churches and it’s the highest-selling Possessed record,” Jeff chuckles. “I like the second one more! But with the first album we were just going buck wild and trying to make a statement. You can’t fake that kind of intensity and debut records are unique in that way, aren’t they? But I tried to make every album different, so that death metal could become this all-encompassing thing. I’m proud of all of it.”

The end of Possessed’s first chapter in 1987 came as a shock to their growing army of fans. As Jeff explains, his bandmates – guitarists Mike Torrao and Larry LaLonde (who’d soon join Primus) and drummer Mike Sus – began to struggle with the rigours of being in an increasingly popular band, and despite the frontman’s efforts to keep things on track, a parting of ways was unavoidable.

“Doing this can be a tough life,” Jeff shrugs. “There isn’t any money in it and a lot of people need that security in their lives. So I understood and I still understand that it’s not for everyone. I still think that if we’d stayed together, it could have worked and we could’ve done a lot of great things. But I couldn’t make them stay. It was heartbreaking. But I didn’t want to be in a band with anyone that didn’t want to be there. Fate had other ideas anyway, right?”

The short version is that in 1989 he was mugged outside a store and shot from close range. A bullet lodged in his spine and paralysed him from the chest down, taking out a lung and several ribs in the process. Still fearing for his life as his assailants fled the scene, he managed to pull himself across the pavement and roll under a parked car, where he waited for several hours before the police and emergency services arrived. Not surprisingly, from that moment on Jeff’s life was turned upside down and playing death metal was no longer the priority it once was. Survival was all that mattered, both physical and emotional.

“I moved into a new apartment while I was getting used to everything,” he recalls. “It was like being in jail for five years. It was lonely. I was surrounded by prostitutes, bikers and drug dealers. It wasn’t the ideal environment for anyone, but especially for someone in my position. I spent five years just doing drugs and getting fucked up on alcohol. I came pretty close to dying, to be honest. But in the end, after I sobered up a little, a friend of mine, who was also in recovery, convinced me that I should go back to college. He basically told me to grow the fuck up.”

If you ever feel the need to turn your life around, let Jeff lead by example. First he quit drink and drugs and then recommitted to education, acing a course at junior college then studying Labor Studies (a mixture of labour law, economics and civil/workers’ rights) at San Francisco State University, passing everything with flying colours. Newly qualified, he subsequently spent a decade working in a hospital and being heavily involved in labour union. Along the way, Jeff fell in love, got married and had two children. But in the back of his mind, the urge to resurrect Possessed and to pick up where the band left off remained and eventually proved irresistible.

“I definitely always wanted to get the band back together, but there were some things I really needed to take care of first. I needed to straighten my life out in many ways, and that’s what I did. Now I have a family and a house and, finally, a new Possessed record. It just took a long time to get there, but things are good right now. I wanted everything to be exactly right, so I guess it was always going to take a long time. The last 12 years have basically been a search, to find the perfect Possessed line-up.”

Possessed officially returned in 2007, a comeback sparked when Jeff was invited to perform guest vocal duties with LA death metal crew Sadistic Intent on a cover of Seven Churches’ classic opener, The Exorcist. Suitably impressed with the way the band performed his own classic material, Jeff decided to bring his band back to life with his new associates’ assistance. Twelve years and several line-up changes later, only drummer Emilio Marquez remains from that initial Sadistic Intent crossover, but Jeff’s ultimate goal has clearly been achieved: 33 years since Possessed last released a full-length studio album, they unveiled an absolute skull-cracking monster in the form of 2019’s Revelations Of Oblivion.

The first in a three-album deal with new label Nuclear Blast, it’s a ferocious reclaiming of the death metal throne, full of newly minted hellish anthems and that unmistakable Possessed atmosphere, with Jeff’s feral bark front and centre, just as Satan intended. If you saw the current line-up at Bloodstock in 2017, you will know precisely how monstrous and destructive the band have once again become. As you might imagine for a man who has suffered more than his fair share of misfortune, Jeff is absolutely thrilled to be back and is newly determined to give metal a massive, jolting dose of death metal in its purest form.

“There are a million bands out there playing death metal, but this is what I consider to be death metal,” he concludes. “Some of the bands out there are so insanely brutal and fast, it’s almost a different style of music! Ha ha! But I know we’ve made a great fuckin’ Possessed record. I’m really interested to hear what everybody thinks about it, you know? Whatever happens, we’re still Possessed. This is still death metal. And life is good.”