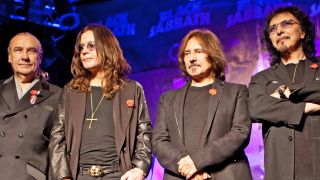 Bill Ward will not return to Black Sabbath for their farewell album and tour unless Ozzy Osbourne performs a “righting of the wrongs” against him, he’s said.

And he’s insisted a “puny ‘Sorry’” won’t be enough to repair their friendship.

The drummer bowed out of the band’s 2012 reunion and subsequent album 13 after saying he hadn’t been offered a contract he regarded as “signable” – leading to months of claims and counter-claims between the parties.

Since the band began gearing up for their final project, there’s been continued speculation that Ward could play a part, with Ozzy saying last year that he hoped it would happen, but that it was down to his wife and manager Sharon.

Now Ward says in a statement: “I have neither severed nor discontinued my relationship with Black Sabbath – however, since 2012, the often inaccurate statements about me as a person and as a musician have caused me to be guarded and be especially detached emotionally and spiritually from Ozzy. His rhetoric above all has brought me the most discord.”

He continues: “With a sad heart, I have to say I will not participate in any musical undertakings until a righting of the wrongs spoken against me has been achieved.

“I have little to no expectations of this happening, but in the order of first things first, I’m looking for an honest accountability of all of Ozzy’s statements that I felt were untrue.

Ward describes the fallout as an “impassable dilemma” and adds: “I don’t think previously strong relationships can remain strong after dispute by just sweeping the offensive stuff under the carpet, or by saying a puny ‘Sorry,’ or, ‘Oh, that’s all over now.’

“Righting of wrong works – and that’s what I want if I’m ever going to be his friend again.”

He maintains that he’s looking for a “signable” contract to return to the fold. “That’s my stand,” he says. “I’ve listened to nothing but insults and false remarks.

”If as a band or as individuals they wish to continue along the same lines, then any notion of an original Black Sabbath lineup will continue to fade away.”

The drummer admits he’s “dearly missed” being part of the veteran outfit but states: “Put simply, it’s up to them. I have been heartbroken over the loss of who I thought we were. And now you know where I stand.”

The drummer has spoken out ahead of the launch of Bill Ward Band album called Accountable Beasts – a title he describes as ironic. He says he’s also involved in a number of other projects.

And his message for Sabbath fans is: “I love you all dearly. You fucking rock. I have been in deep regret that a true union was denied.

“I’ve remained faithful to you and honest with myself. Had I not been honest throughout I would have perished long ago. Stay safe and stay strong.”

In March, Sabbath announced their last-ever show would take place in Japan in November, but last week said that Ozzy and friends would perform instead. The news led to speculation that guitarist Tony Iommi’s cancer had returned, but he later reported: “I’m fine.”

The metal pioneers are still expected to release their final album later this year.