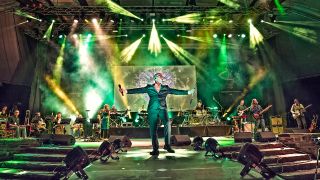 Big Big Train have announced the postponement of their 2020 US tour dates this May in the wake of  the cancellation of RoSfest, which was to have been the band's first date on the tour, and the ongoing travel and health issues raised by the current Covid-19 crisis. And guitarist Dave Gregory has announced he's leaving the band.

“Like all artists with tours planned for the coming months, we have been monitoring events carefully and with great concern regarding this global health issue," Greg Spawton tells Prog. "Sadly 6 weeks before most of the band and crew are due to fly to the United States, and following discussions with our tour and business management, it is apparent that postponement is now the only prudent course of action. The health and safety of audiences, crew and band must always come first.”

The re-arranged dates are expected to take place next year. As the band may play different venues in some cases, ticket holders should contact their point of sale for concert ticket refunds.

Also, guitarist Dave Gregory has decided to leave the band due to a reluctance to tour internationally.

“This has not been an easy decision for me, but after careful consideration I have concluded that I would prefer not to tour internationally with Big Big Train,” Gregory says. “I am proud of the role I have played within Big Big Train and have enjoyed the last decade with the band immensely. I look forward to remaining associated with Big Big Train in the future.”

At Gregory's recommendation, American guitarist Randy McStine will perform live with Big Big Train at this year’s shows. McStine had previously released an album with Big Big Train drummer Nick D’Virgilio and The Flower Kings/Steve Hackett bassist Jonas Reingold as The Fringe and has played live extensively with Nick over the years.

“It is truly an honour to be considered by Dave and the band as a suitable choice to step in for these shows,” McStine tells Prog. “I first became aware of Big Big Train on their Gathering Speed record, so it’s exciting for me to play a part in their evolving story.”

Details can be found at www.thepassengersclub.com of how North American tour ticket holders can obtain free membership. Existing members of the Club will have their memberships extended free of charge by 3 months.

Big Big Train's UK and Europe shows for later this year will still go ahead at the time of writing.