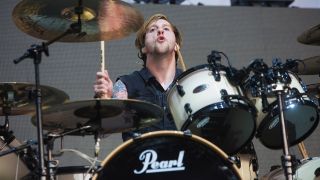 Bullet For My Valentine drummer Michael ‘Moose’ Thomas will sit out the band’s upcoming tour dates to be with his pregnant wife.

Thomas has stepped away from the group while he and his wife await the birth of their first child together. His place will be temporarily taken by Pitchshifter’s Jason Bowld.

BFMV say: “Our brother Moose got the wonderful news late last year that he and his wife are expecting their first child together, which I’m sure you’ll join us in congratulating them on.

“In light of this, Moose has made the decision that, after 10 years of non-stop touring, he’s going to take a few months out to be at his wife’s side around the birth. We support him 100% in this, and we thank our good friend Jason Bowld for agreeing to step in on the drums in the meantime.”

The Welsh metal outfit kick off a North American tour tonight in San Diego. They’ll be on the road in the US and Canada until March 7, with Asking Alexandria in support. They return to the UK for six dates in November and December.

They add: “Our touring cycle will remain unaffected by this, and Moose will be back in the hotseat later this year ready to kill it again.”

Bowld has also worked with Killing Joke, Pop Will Eat Itself and Axewound.