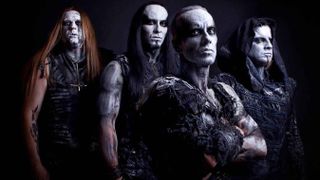 Behemoth have confirmed that they’ve entered the studio to begin work on the follow-up to 2014’s The Satanist.

Last week, the band’s frontman Nergal posted a clip showing them rehearsing new material – and he’s now given an update on Instagram reporting that they’re now at Poland’s Monochrome Studio

Nergal says: “My church is black. This is our shelter for the next week – couldn’t be more excited than I am now! Teaming up with my old partners in crime Tomasz Orion Wróblewski and Zbigniew Promiński with technical back up from Mr. Bergstrand and Haldor Grunberg to make the ultimate artistic statement.”

No release date has been set, while further album details will be revealed in due course.

Nergal also reports that he’s been questioned by Polish authorities for a band t-shirt with a design similar to the country’s official coat of arms.

They are accused of disrespecting Poland’s white eagle emblem on their Republic Of The Unfaithful t-shirt design, which features an eagle and two snakes behind an inverted cross.

The band no longer sell the t-shirt at their shows, but Nergal reports that it is Behemoth’s best-selling shirt in their catalogue.

Nergal says: “Several individuals have been already questioned including heraldists who have made their statement clear: This is not a Polish emblem. Apparently it’s not enough for the decision makers in the court.

“Are they looking for a scapegoat? Is this another attempt of the Polish government to convict Nergal and give an example for other artists? What’s the hidden message of those actions may I ask?”

He adds: “Weird times, weird country, weird vibes… I do not feel safe and comfortable here I must admit, but do I feel guilty? Fuck no. It is obvious that the eagle that has no crown so can not be a Polish emblem. Period.”

He then points to fans who have the design tattooed and says: “Shall we arrest them? Peel the skin off? Cover it up? These rhetorical questions I’m gonna leave unanswered here and go to do what I do best – piss stupid people off with sincere and honest art and I shall never give up on my freedom to do so.”