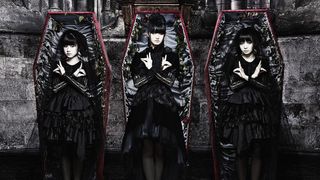 Babymetal have announced that they’ll released Live At The Tokyo Dome next month.

The live package will launch on April 12 on 2 DVD and 2 Blu-ray and was filmed in the Japanese capital across the trio’s Red Night and Black Night performances in September last year.

Babymetal performed in front of an estimated 110,000 people across both shows.

Last month, the band’s Su-metal revealed that seeing Metallica live in Japan in 2013 made metal less “alien and scary” for her.

She told Metal Hammer: “I was so surprised! I was like, ‘What in the world is this?’ I found it interesting that instead of hearing their music through my ears, I felt everything with my heart.

“Until then, I thought metal was something so alien and scary, but that concert made me enjoy metal and want to know more about the genre.”

Babymetal went on to support Metallica in Seoul, South Korea, earlier this year. They released their second album Metal Resistance in March 2016.