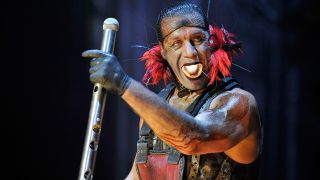 Earlier this evening, a mysterious image popped up on the side of the MAS Museum in Antwerp. Located in the heart of the Belgian city, one of the museum's outer walls has been engulfed by a large blue and white logo belonging to Rammstein, while another building in the city has been spotted sporting a similar, but subtly different image. This leads us to believe that metal's mad scientists are up to something big.

But what? It's been 10 years since the release of last album Liebe ist für alle da, and we already know that its follow up is in the works. Originally slated for spring 2019, could the projections be a luminous foreshadowing that new music is closer than we thought?

Of course, Rammstein's touring schedule for next year is also looking suspiciously sparse. Aside from a New Year's Eve appearance in Mexico – where it's rumoured the set will include some new material, so keep your ears peeled for that – they've got nothing lined up. As anyone who's ever seen them live before will know, Rammstein know how to throw one hell of a party. A new album and a brand new bells and whistles tour landing in 2019 is almost too exciting a prospect to entertain.

But for now, we're just going to have to wait and see what the band pull out of the bag. In the meantime, you can follow the Twitter hashtag #gebtfeinacht for more updates as they happen in real time.