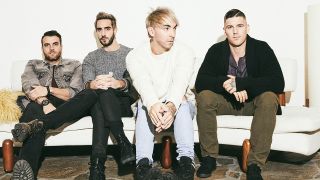 All Time Low have revealed that they’ll release their new studio album titled Wake Up, Sunshine this spring.

The follow-up to 2017’s Last Young Renegade will arrive on April 3 through Fueled By Ramen and will feature the lead single Some Kind Of Disaster, which All Time Low debuted last month.

In addition, the Maryland outfit will premiere their new single Sleeping In this coming Thursday (February 20) on Scott Mills’ BBC Radio 1 show at 2pm GMT.

Alex Gaskarth, Jack Barakat, Zack Merrick and Rian Dawson will also be at London’s The Garage on February 21 and the Brudenell Social Club in Leeds on February 24.

Speaking about the new record, vocalist Gaskarth said: “We got back to how we started. It had been a long time since the four of us made a record under one roof. That became a central theme.

“We’ve been a band for 17 years. Everybody brought something to the table. A lot of what you’re hearing came from those magic moments together.”

Guitarist Barakat added: “I think we accomplished something special. By putting our four heads together, we were able to make a classic All Time Low album.”

Wake Up, Sunshine will also feature guest appearances from blackbear on Monsters and The Band Camino on Favorite Place.