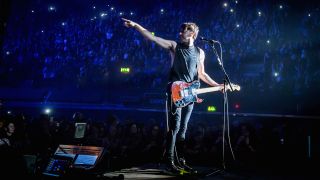 Weeks ahead of the release of their ‘Future Hearts’ album, All Time Low brought their pop punk anthems to north west London for one-night only. Here’s what we learned…

**NO EXPENSE HAS BEEN SPARED THIS EVENING **Opening with Love Like War, it soon becomes clear that All Time Low have pulled out all the stops to make their evening at Wembley Arena one to remember. Decked out with a giant video wall, a stage set heaving with ramps and platforms, complete with a jaw-dropping light show and the sort of pyro displays that would make Gene Simmons green with envy, it’s truly a sight to behold.

**THEY’VE GOT A TON OF HITS AT THEIR DISPOSAL **Never has the quality of All Time Low’s back catalogue been more apparent than tonight. Rattling through a mammoth two-hour set, the most noteworthy thing about their performance is that it never gets boring, not even once. There’s not even a mid-set lull where you can head off for a toilet break, as the mass singalongs for Lost In Stereo and Backseat Serenade keep all eyes on stage.

IT’S VERY MUCH A POP SHOW – BUT THAT’S NOT TO BE SNIFFED AT They’re a band that provoke the tinnitus-inducing levels of screaming that you’d expect at a One Direction or Katy Perry concert. Yet despite the fear of wrecked eardrums, this isn’t a bad thing at all. Whether it’s Alex Gaskarth popping up on the sound desk halfway through the set for a stripped down version of Remembering Sunday and Therapy, or the band bringing a load of giddy fans on stage for Timebomb, it all culminates in a show that would coax a smile from the most cynical of rock fans.

**THEIR NEW MATERIAL SOUNDS GREAT **The decision to play such a massive show before the release of their forthcoming album Future Hearts is a bold move. But judging by the response tonight, their sixth full-length release will only keep them in the big rooms. The new songs Kids In The Dark and Something’s Gotta Give elicit fevered responses and sound like instant hits.

THEY’RE A POP PUNK POWERHOUSE If there was a big four of pop punk, it would most definitely consist of Green Day, Blink-182 and Fall Out Boy. Tonight, the Maryland foursome prove worthy contenders for the coveted final slot. They’ve clearly learned a thing or two from supporting Green Day at the Emirates in 2013 with Gaskarth wheeling out a few Billie Joe Armstrong ‘way-oh’ call-and-response moments, and the band could probably do well to drop Blink’s second-hand dick jokes, but ultimately, they’re a superb band in their own right. There’s a special atmosphere in the room tonight and, for a few hours, Wembley Arena rivals Disney World for the happiest place on Earth. Job done.