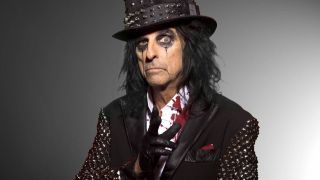 Alice Cooper has confirmed he’ll be working on his next solo album and the successor to Hollywood Vampires’ 2015 self-titled debut.

He also reveals that his next studio work will feature material he co-wrote with original Alice Cooper bandmates, Neal Smith, Mike Bruce and Dennis Dunaway.

Cooper tells ABC News: “I’m working on two albums at once right now. And I’m gonna be on two tours this summer. I got my own tour and then I got the Vampires tour. So, I don’t get a rest.

“Neal, Mike and I just wrote two or three songs. Dennis and I wrote some songs together. When the original Alice Cooper band broke up in 1974, we broke up as friends. We never broke up as enemies.

“If they’re doing a gig, I show up and sing a few songs with them. If I’m doing a gig and they’re in town, they come up on stage. So, there’s never been any bad blood between any of us.”

Cooper will embark on a North American tour and headline the TeamRock-sponsored Stone Free festival, London, on June 18. He’s also set to perform with The Hollywood Vampires in New York, Lisbon’s Rock In Rio and Wisconsin’s Rockfest this summer.

The supergroup also featuring Joe Perry and Johnny Depp paid tribute to Lemmy in their performance at the Grammys earlier this week.