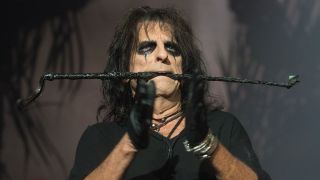 Alice Cooper and Rick Wakeman will headline a new indoor festival next year. Stone Free will take place at London’s O2 venue on June 18 and 19, and will also feature Marillion, Blackberry Smoke and Steve Hackett. More acts will be announced in due course.

“Coming to the UK is always like coming home for us. Fans in the UK are always high energy, always there,” says Cooper. “Headlining the very first Stone Free Festival at London’s The O2 in June next year is an example of why we feel so welcome. It will be my only performance in the UK next year, so that makes it even more special. And, as always with my show, you can expect the unexpected!”

“After the success of the Journey To The Centre Of The Earth shows last year, I’m over the moon to have the opportunity to perform King Arthur for the first time since 1975 with an orchestra and choir,” adds Wakeman. “It’s going to be wonderful!“

Day, weekend and Rock Royalty tickets (including artist meet & greets and signing sessions), will go on sale from the festival website at 10am on Friday November 20.