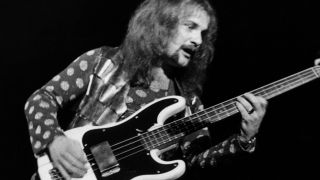 Jim Rodford, bass player with The Zombies and a former member of The Kinks and Argent, has died after a fall at his home. He was 76.

Rodford had just returned home to The UK after a short our of Florida with The Zombies. His final performance was on January 14 at the 30a Songwriters Festival in Miramar Beach, Florida.

Rodford’s cousin, Zombies singer Rod Argent, has paid tribute, saying, “It is with deep sadness that I learned this morning that my dear cousin and lifelong friend, Jim Rodford, died this morning after a fall on the stairs.

“When Colin [Bluntstone] and I put together our second incarnation of The Zombies in late 1999, our first phone call was to Jim. He gave us absolutely unflagging commitment, loyalty and unbelievable energy for eighteen years, and our gratitude is beyond measure.

“Jim was a wonderful person, loved by everybody. When Colin and I, shocked and hardly able to talk, shared the news this morning, Colin said, “I’ve never heard anyone say a bad word about him…” He will be unbelievably missed. Goodnight and God Bless dear friend.”

In a statement on Facebook, Colin Bluntstone said, “I am so desperately sorry to hear that Jim passed away last night! I’m still in shock and find it hard to believe what has happened. Jim was such a wonderful character, loved by all who knew him. He was a great bass player and vocalist a real musicians musician who loved music especially playing live and seemed to know every band we ever played with. They would come to our dressing room and usually walk straight past Rod and I simply asking ‘is Jim around?’.

“On the rare occasions The Zombies got into a musical tangle he had the authority and skill to always pull us back together again and we are really going to miss his playing and his beautiful spirit, he was an inspiration and a good friend. I am so proud to say I played with Jim Rodford!”

Rodford played an important role at the beginning of The Zombies’ career in 1961, lending them equipment and coaching them through their first rehearsals. He performed with skiffle group The Bluetones and with Mike Cotton’s jazz band before joining Argent in his eponymously named band following the break-up of The Zombies in 1968.

Argent’s had hit singles with Hold Your Head Up in 1972 and with God Gave Rock & Roll To You (famously covered by Kiss) the following year, before the group broke up in 1976. Rodford was then asked to join The Kinks, debuting with the band on 1979’s Low Budget album. He remained in The Kinks until they broke up in 1996.