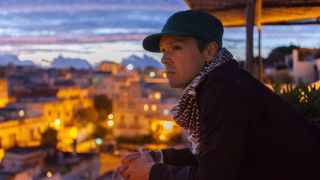 French-Canadian post rocker Alex Henry Foster has released a 15 minute short film for his epic song The Hunter (By The Seaside Window). A cathartic journey taken from his forthcoming album Windows In The Sky, released through Hopeful Tragedy Records on May 1.

“The Hunter (By The Seaside Window) emerged from a 30-minute jam that would later be released as 15-minutes of a noisy, out-of-breath and tortured kind of dark, spiritual, emotive, and redemptive sonic journey," Foster tells Prog.

"The lyrics are part of a series of texts that I wrote in my new home in the middle of the Virginia Highlands after completing a two-years exile in the city of Tangier. The symbolistic elements are numerous but are fundamentally the most honest I’ve been able to be regarding my lifelong struggles with depression and anxiety."

Inspired by the work of David Lynch, The Hunter (By The Seaside Window) movie was directed by Foster’s longtime collaborator, French filmmaker Jessie Nottola (who has worked with the likes of Tinariwen, Tiken Jah Fakoly and Arthur H), and shot this January in the wintery Canadian wilderness somewhere around 200km north of Montreal.

Pre-oder Windows In The Sky