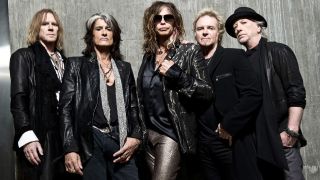 Aerosmith’s Joe Perry says the band “definitely” have one more studio album in them – and could even record a second.

They’ll head out on what could be their last tour across Europe in May, with Perry saying they deliberately put planned dates in the US on ice so they could return to the studio.

He tells AZ Central: “We want to get in and give ourselves some time to get something done. We definitely have another record in us, if not two. But we’ll see how that goes.”

Asked if the material would be similar to 2012’s Music From Another Dimension, which received a lukewarm reception from some of the band’s fanbase, Perry responds: “Well, the next one will be a little more cohesive. At least in talking to vocalist Steven Tyler about it, that’s been kind of our vibe on how it’s gonna go.

“The main thing is just getting in a room and starting to lay stuff down.”

Aerosmith announced the first leg of their Aero-Vederci Baby Farewell Tour in November last year – but Perry says he can’t imagine hanging up his guitar any time soon – and reports that the dates aren’t “officially” the last the band will play.

He adds: “We postponed the American tour we were supposed to do this fall. And we’re gonna go out and tour until we’re done.

“We’re gonna try and hit every place we’ve ever played and never played. There’s always new places to go. I’d like to play China and the Far East. There’s a lot of places that are off the beaten path. Is this the last tour? Well, I don’t know. I don’t think so.

“It’s still really exciting for us to get out and play. That’s why we started doing it. It’s amazing that I still get that feeling – and I know the other guys do. We’ve grown up together and managed to hold on to this band. It still feels fresh.”

Perry continues: “We’re coming up on our 50th anniversary in 2020. I never would have thought we would have made it that far. We’re the same guys that got together in 1970 in an apartment in Boston and we’re still trying to play better than we did the day before. Still trying to get it right 50 years later.”

Aerosmith have so far announced 17 lives dates for later this year. Find their tour itinerary below.