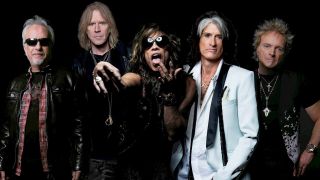 Aerosmith drummer Joey Kramer says that when it comes to playing live, no one can touch his band – not even the Rolling Stones.

He made the comments while speaking to Classic Rock for an upcoming feature – and he also reports that Mick Jagger and co “never had anything to offer me musically, especially in the drumming department.”

Kramer says: “First of all, as far as Aerosmith goes there is no band that has been around for almost 50 years that still has the original five guys in the band.

“Everybody is always raving about the Stones, saying the Stones this and the Stones that. I’ve never cared for the Stones. They never had anything to offer me musically, especially in the drumming department.”

Kramer adds: “The Stones is not the original band and I do not care for them. I think if you came to see an Aerosmith concert, people would realise that we play so much better than them that it’s silly because they’re not so good live.

“Yeah, they are what they are and all of that, but I don’t think there’s a band out there today that does what we do.”

Aerosmith are lining up their Aero-Vederci Baby Farewell Tour which will see them play shows across Europe this year, including a headline set at the Download festival.

And asked if he saw bands coming through to replace Aerosmith as stadium fillers and festival headliners, Kramer responds: “I don’t. When the bands that are around now are finished I think it will be the end of a very long era. I’m talking about bands like us, AC/DC and Van Halen.”

Find a full list of Aerosmith’s 2017 tour dates below.

Done With Mirrors: The album that took Aerosmith back to the big time