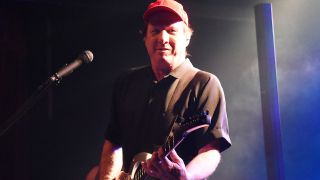 Talking Heads guitarist Jerry Harrison has announced that he will team up with former King Crimson guitarist Adrian Belew and Brooklyn-based funk band Turkuaz, to take Talking Heads' 1980 album Remain In Light on the road to celebrate the album's 40th anniversary.

“It’s been a long time since I’ve toured,” says Harrison. “Once I started producing Turkuaz, I started to think. I’d love to play Talking Heads’ songs again. And, Turkuaz is one of few artists that really understand this music.

"Once Adrian signed on it was clear we could recreate the excitement and joy that was achieved in Talking Heads iconic 1980 Rome concert.”

Belew first worked with Talking Heads on Remain In Light, and would also appear on 1982' s The Name Of This Band Is Talking Heads (his King Crimson band mate Robert Fripp had appeared in 1979's Fear Of Music).

Currently they will appear at July's Floyd Fest in America, headlined by The String Cheese Incident. Although this is the only date announced so far, Jambands reports that Belew promises “information about other festival dates” is coming soon.