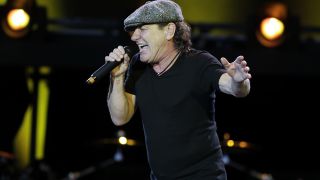 Brian Johnson will tour with AC/DC again, according to reports.

The vocalist was forced to stop touring with AC/DC in 2016 under the threat of permanent deafness, with the Aussie giants famously bringing in Guns N’ Roses frontman Axl Rose to complete their Rock Or Bust world tour.

Johnson has since worked with audio experts Asius on a solution to his hearing problems, with Beano appearing to confirm his return to the band back in January after being spotted outside a Vancouver studio with drummer Phil Rudd in August last year.

And, after AC/DC’s longterm engineer and mixer Mike Fraser said last week that they had been in the studio “doing something,” it appears the band could be back on the road in the future with Johnson.

Trunk said (via NME): “I have sources that have told me that they are absolutely going to tour with Brian back again. That’s all unconfirmed from their camp, but I had it from some reliable sources.”

Trunk added: “I think it’s pretty much a done deal that AC/DC, at the very least, are going to release some sort of record and it’ll be some sort of tribute to Malcolm Young, just like Back In Black was a tribute to Bon Scott.

Since his departure from AC/DC Johnson has played live with Muse, Paul Rodgers and Mick Fleetwood.