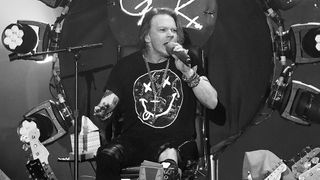 Axl performs with GNR from his throne (Image credit: Getty)

AC/DC took the decision to offer refunds on their shows with Axl Rose because they wanted “to do right by their fans.”

The band hired Guns N’ Roses frontman Rose as their guest vocalist after Brian Johnson was ordered to stop touring or risk going deaf. Rose will sing with Angus Young and co on the remainder of their Rock Or Bust tour dates.

Last week, ticket retailers contacted fans saying they could request a refund on those dates if they wish – a move the band say was their call.

A spokesman for AC/DC tells TeamRock: “The band made a decision to offer this. As they care about their fans and wanted to do right by them, they instructed local promoters to offer refunds.”

There’s no exact figure as to how many fans took up the refund offer across the 12 European dates, although Belgian newspaper De Standaard reports that 7000 people asked for their money back for the May 16 show at Werchter Festivalpark.

AC/DC’s spokesman adds that the local promoter confirmed that a “small number” of refunds were given for the May 7 gig in Lisbon. He adds: “They will be back on sale today and they expect them to sell out in half an hour.”

It’s also been confirmed that an audio recording claiming to be of Axl Rose rehearsing with AC/DC is indeed the GNR man.

The spokesman adds: “The audio was recorded by a Brazilian fan standing outside the site and it is Axl. The band have been rehearsing solidly for two weeks in Lisbon.”

The audio clip of the band and Axl Rose playing Thunderstruck can be heard below.

Rose has been performing with the reunited GNR from a chair after he broke his foot during their first comeback gig last month.