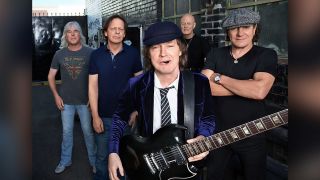 The promoter of an AC/DC show in New Zealand has threatened to take legal action against resellers who are offering tickets for sale – even though they don’t exist yet.

Ian Magan, who’s behind the show in Auckland, says the Aussie giants are determined to play fair with fans.

And he believes that’s not happening on ticket site Viagogo, where tickets are on sale for up to $1300, even though the show’s date has yet to be announced.

Magan tells the New Zealand Herald: “I have issued them a cease and desist. We will take legal action if they don’t comply.

“AC/DC are very egalitarian. They want each fan to have an equal chance of attending the concert.”

A spokesperson for Viagogo said the tickets were on sale as a result of pre-allocation programmes, meaning some people already knew they had a ticket to sell even though they didn’t have it yet. She added it was “perfectly legal to resell tickets” and each transaction was protected by a guarantee.

AC/DC: the story behind the comeback of 2014