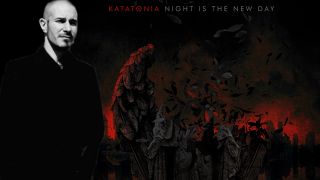 The creative French rockers believe they try to have sincerity with their progressive approach to making music and that they appeal to those "reaching for something higher, possessed by something stronger and deeper.”

It's no surprise then, that they are heavily influenced by atmospheric prog metal pioneers, Katatonia.

The Swedish metallers began as a death metal project but the band have continually built upon their sound adding more and more elements to create something unique and distinctive that's forever developing.

One album in particular that encapsulates the band's multifaceted identity is Night is The New Day. Released ten years ago, the record expanded upon the more progressive elements of their sound and followed up what could be considered their break-through album, The Great Cold Distance.

In celebration of the ten year anniversary of Night Is The New Day, we chatted to Klone guitarist Guillaume Bernard to find out why he feels the album is so important.

"I remember the release of this album very well, I was very curious to know what Katatonia would do next after the Great Cold Distance.

"I became a fan of the band when I discovered their album Last Fair Deal Gone Down,  and I still follow them to this day.

"Klone were lucky enough to have the chance to play with Katatonia in 2010, when they toured for the release of Night Is The New Day. We had just released our album Black Days and I have very fond memories of the show in France.

"I played this album a lot during a separation and felt very much in harmony with the atmosphere of it. I listened to it over and over again for quite a while! At one point, it had pretty much become an addiction – I just wanted to listen to it again and again to discover every detail!

"I was so impressed by the production of the album that I contacted the sound engineer who worked on it. Everything about it just sounds so perfect and clearly distinguishable. Each musical element is in its place. I remember, when I listened to it, I became utterly convinced that Steven Wilson had been involved with it!

"Some of my favourite Katatonia songs are on this album, you can listen to it from beginning to end on repeat and it flows seamlessly! I find the piece Nephilim, in particular, to be magnificently heavy. I also love it when music inspires me to travel and this album is perfect for inspiring wanderlust!

"The drum sound is beautiful, both soft and powerful, subtle and very heavy. The drum patterns really bring just the right thing around the riffs. Everything is very catchy and groovy.

"The work on the sounds of the guitars is really remarkable, very refined. I really like how they are spatialised. Everything is really very meticulously thought out – the mix of large saturated guitars and more subtle clear sounds is perfect!

"The lines in the vocal melodies are bright and incredibly clear. The harmonies perfectly highlight the leads and I love the voice processing – all the effects, spatialization, delays reverbs. Klone are very much influenced by this style of production.

"I think Katotonia are the perfect bridge between pop, rock, metal and prog with this album. The fusion of styles all working perfectly together. You don't get the feeling that things are glued together, everything just seems so very fluid. This is what I strive for when I compose a song with Klone.

"The album has an aura. It's a record that I feel is very sincere in terms of writing – and it's touching. It's very important for me to feel something when I listen to a record – it's what makes a record good. Night Is The New Day is a must-have album from the 2000s."

In celebration of the ten year anniversary of Night Is The New Day, Katatonia have re-released the album as a deluxe edition featuring b-sides, remixes and live recordings, a DVD featuring a hi-resolution stereo remaster, 5.1 mixes, promo, a 10-inch Longest Day EP in red vinyl and a 48-page hardback book, and it's available to order now.