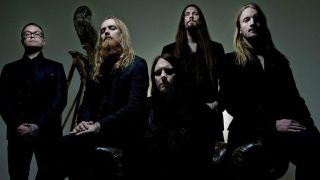 Katatonia have announced plans to celebrate the 10th anniversary of their eighth album Night Is The New Day.

The Swedish outfit will not only mark the milestone by playing the record in its entirety at venues across Europe, but a deluxe edition will arrive on May 17 via Peaceville Records.

Guitarist Nystrom says “We, and many others, look upon this album as one of the most well produced, dark and atmospheric albums within our discography.

“It spawned new classics with Forsaker and Day And Then The Shade that have rarely left our live repertoire. As a band, we dug deep into ourselves to deliver the epic ballad Departer as well as the folk song undertones of Idle Blood, Inheritance, The Promise Of Deceit and Onward Into Battle.

“Then there is the rich contrast of dynamics in songs like The Longest Year, Liberation, New Night and Ashen but we also slowed things down further to impending doom with the song Nephilim.

“All of these songs glued this album together like pillars carrying the weight of both our night and day.”

A limited edition deluxe version, which is now available for pre-order, will also launch on May 17 and feature the album, b-sides, remixes and live recordings, a DVD featuring a hi-resolution stereo remaster, 5.1 mixes and promos.