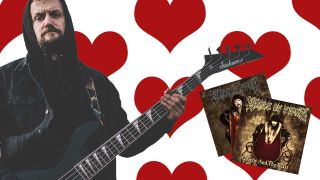 I first listened to this album in the summer of 1998, not long after it was released by Music For Nations. At the time I was listening to a lot of punk, hardcore and classic metal like Pennywise, Sick Of It All, Metallica and Iron Maiden so hadn’t really delved into the more ‘extreme’ side of metal at that point.

One day in school my friend, Nick, was raving about this band, Cradle Of Filth, who I had never heard of. So I swapped Around The Fur by Deftones for a copy of Cruelty And The Beast. For the first few listens I really couldn’t get in to the vocal style but I was instantly drawn to the musical side of it.

After a few weeks of listening on repeat, I was completely hooked. If I had to guess, I easily listened to this album hundreds of times over the next couple of years. Back then, the stand out track for me was Cruelty Brought Thee Orchids – and it remains so, even to this day.

I think that when Cruelty And The Beast came out it was around the same time Marilyn Manson was really making news and ‘scaring parents’ and probably giving metal a bad name! Cradle Of Filth had a similar kind of impact in the UK – especially due to their appearance on BBC documentary, Living With The Enemy.

Their notorious ‘Jesus is a Cunt’ t-shirt compounded that and made the band infamous even amongst people who had never listened to heavy music. So, on top of their music, the cultural impact that they had also contributed to their importance as an influential band – and their place in British music history.

It would have been awesome to see them live around the time of this album – however, I was only 13 or 14 when it came out so it was a bit beyond me then. The first time I saw them was as support to Slayer at Birmingham NEC, probably on the Midian album cycle.

They have a pretty extensive back catalogue but for me this album definitely ranks in their top 3 – alongside Dusk & Her Embrace and Midian. Although I don’t listen to them as much these days, the band and Cruelty And The Beast definitely had a big influence on me getting into black and death metal bands at the time, and so they’re a part of my personal musical journey.

Cradle Of Filth will celebrate the release of the remixed and remastered edition of Cruelty And The Beast (out Nov 1) with a special show, Into The Pallademonium, where they will be playing the 1998 album in its entirety at the London Palladium on October 19.