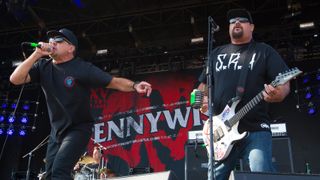 Download is just days away and we’re catching up with some of the biggest and best bands on the bill.

It’s been 12 years since Pennywise last played Download. What do you remember about day?
Fletcher Dragge: “Yeah, it’s been a while. I remember it well because it cost me £8,000 in damages! We were made to leave after our little dressing room incident where the place might have got smashed up. I received quite a large bill for damages and I came home broke. I wasn’t happy – but it was a great show. And Iggy Pop was on that day with Mike Watt playing bass. That was awesome.”

What led to this destructive bout of feng shui?
“I knew we were playing a bunch of festivals in Europe, so I’d bought a shirt that said SECURITY on it. At these festivals, we’d usually be on the second stage and back then, you couldn’t have access to that. I wore my t-shirt and just roamed around wherever I wanted. I basically just confused the shit out of everybody and when I started smashing up the dressing room, security came. I told them I had it under control. They came back when they figured out I was in a band. The Wild Boyz were down there too – [Chris] Pontius and Steve-O, or maybe Ryan Dunn – and they were smashing a bunch of shit up too and they tried to put it on my bill! Download was like, ‘You broke this and that’ and I was like ‘I didn’t break that! Wild Boyz did that! I’m not paying for their patio furniture!’ But it was really fun and we’re looking forward to coming back and creating a little more mayhem after all these years.”

Presumably you won’t be smashing up your dressing room again…
“That is correct. I do not need an £8,000 bill for a vinyl couch and a mirror! And maybe some windows. I can’t remember.”

Apart from leaving a nice and tidy dressing room, what do Pennywise have planned for their Download set?
“We’ve been playing our first album in its entirety a few times lately and it’s been really super cool and fun. But at festivals you’ll usually play like a 40-45 minute set, so you try to squeeze in a little bit everything. Well we do, at least. We try to throw in a little bit from each album and make sure we play the hits – if you can call them that – so we try to throw those in there and end it with Bro Hymn every time. It’s definitely going to be a mixed bag of songs but we’ll definitely be keeping the energy up and be having a good time. There’s no doubt about that!”