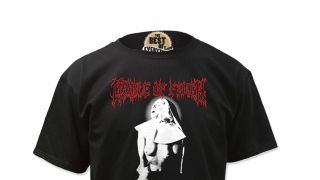 As BBC 6Music listeners take part in the annual ‘Wear Your Old Band T Shirt To Work Day’, it got us thinking.

While every day is a ‘Wear Your Old Band T Shirt To Work Day’ at TeamRock, we drew up a list of the most outrageous, tasteless and frankly unwearable t-shirts that are guaranteed to get you the sack and probably arrested.

CRADLE OF FILTH – JESUS IS A CUNT
Yes, it’s an obvious choice but seldom has a t-shirt exerted such phenomenal offensive power. Cradle Of Filth had already become notorious in the metal world by the time they first made this classic available, but the fact that fans were being arrested and elderly ladies were shrieking in outrage around the nation… well, it certainly didn’t do Cradle any harm to be as famous for a shirt as they were for making a racket. Poor old Jesus, though, eh?

MARDUK – FUCK ME JESUS
Ah, well at least offering to have sexual intercourse with our Lord and saviour is a little less unpleasant than what Cradle Of Filth said, but Marduk still scored plenty of incensed Christian points when they plastered this slogan on the back of a shirt for the first time. The naked woman with the crucifix up her bum is a nice touch, too. Bless.

CREPITATION – SPUNKATED RAPISED ENFUCKMENT
It’s probably best not to analyse the thought process behind a shirt like this incredibly dubious effort by Crepitation. Let’s just regard the utter lack of taste or morality involved in the front image of ghastly sexual horror and applaud the linguistic ingenuity showcased by that unforgettable slogan. You horrible, horrible people.

CANNIBAL CORPSE – BUTCHERED AT BIRTH
They may have been outgunned by other bands over the years, but Cannibal Corpse are the daddies of the gruesome t-shirt design and Vince Locke’s Butchered At Birth remains the one image in the band’s visual canon that, despite its familiarity, still retains the power to turn stomachs and make burly, bearded men say ‘Christ, that’s a bit rum!’ No actual babies were harmed in the making of this t-shirt, we hasten to add.

I DECLARE WAR – FUCK YOUR TITS
Where death metal obsesses about violence, gore, horror and war, deathcore tends to just be horribly misogynistic and stupid. Which means that this pearl of anti-wisdom from generic no-marks I Declare War is as offensive as any on this list. Of course, it’s probably all meant to be ironic or satirical or something… and we don’t doubt that the band love their female fans in a nice, polite, respectful way. But really… what a bunch of dicks.

ARKHON INFAUSTUS – HELL INJECTION
Jesus gets a pretty rough deal, doesn’t he? Anyone would think he spawned a global religion or something. Anyway, French blackhearts Arkhon Infaustus didn’t want to sleep with the bearded wonder or to call him horrid names. Instead, the tied him up, stuck needles in him and, seemingly, gave him boobs and a vagina. Fun times!

CATTLE DECAPITATION – FORCED GENDER REASSIGNMENT
A band known for their incredible artwork, Cattle Decapitation seem to have had a momentary lapse of reason when they put this monstrosity together. Metalheads generally enjoy horror movies and literature and all manner of disgusting, violent stuff, but there’s something uniquely unpleasant about this shirt. Better to wear it than see it, we suspect.

The images in the gallery are 100% offensive. Don’t say we didn’t warn you…