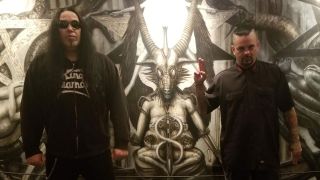 Vital Remains' brutally bleak brand of death metal, sophisticated riffage, heavy as fuck gutterals, a unique blend of ambience and even Spanish-style guitars set them apart many of their contemporaries. Current frontman Brian Werner, who has been with the band since 2007, bears blood-thirsty bellows and a charismatic stage presence that make him the perfect fit for the US metallers.

Their appearance at Morbid Fest at the end of April was made all the more epic with Werner's antics – it included a ram skull and a ton of fake blood, what more do you want from a death metal show?

We caught up with the blood-drenched bellower to learn his top 10 essential death metal tracks...

"For me I remember being 23 years old when this came out and it was a complete game changer, the speed, the melody the overtly and violent content, it was an instant classic for me as a fan"

"The opening riff of this song just kicks you right in the balls while the vocals put's a 7.62mm bullet through your skull"

"Proof that death metal can be robust, and full of emotion without sacrificing the brutality"

8. Hate Eternal – King of All Kings

"This was my first introduction to Monstrosity when I was 19 and the string skipping, triplet guitar riff took my breath away and I became an instant fan"