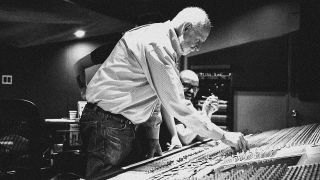 It’s hard to believe that a full ten years have passed since Ghost formed in Linköping, Sweden. Behind their stupidly-catchy blend of polished riffs, hard rock hooks and high-flying choruses, the Satanic Swedes have released three progressively-ambitious studio albums, snagging the 2016 Grammy for Best Metal Performance and emerging as one of our world’s legitimate contenders for full global domination. As they put the finishing touches on their ravenously-anticipated fourth outing, founder and frontman Tobias Forge tells Hammer that fans should prepare for Ghost as they’ve never seen or heard them before.

Let’s cut to the chase – how does the new material sound?

“That’s hard to answer. It’s a very bright sounding record. And it’s a very heavy record, I’d say, but not from a Metal Hammer point of view, meaning all metal through-and-through. But it’s a heavy record with a heavy theme. I think the overall ambience is very serious.”

So if it’s not heavy in the traditional sense, how do you create that sense of emotional weight?

“Every time I write a song I try to come to terms with that. Technically, a Ghost song could just be piano and vocals but it could also be full pounding, heavy-thrashing hard rock. I’m not in any way comparing us to them but I guess our modus operandi is a little like what Queen did – just decide to play really good songs and not focus too much on sticking to a recipe.”

What’s something you’re doing on this album that you haven’t done on prior records?

“This is going to sound very high horse and extremely ambitious but at the end of the day that’s because it is very high horse and very ambitious, but there’s a little more of a piano presence on this record. Not in a weak sense, like a clink, clink, clink, but more of a performance style. More of an Elton John style, which makes the whole thing flourish in a way that I’ve never taken Ghost before.”

We’ve heard the storyline of the band is heading in some dramatic new directions. Can you give us a hint of where it’s all going?

“I know the story plot but I can’t really tell you right now. I can say that the presentation is going to be more theatrical. We’re making a lot of changes to the live show. There’s going to be a bit of an extension of personnel, affecting how everything is going to be performed live from now on. Not just the new songs but how we play everything — Ritual, Prime Mover, everything. There will be tons of costumes, tons of props…it’s getting to be a very theatrical production and I dare say that for anybody who’s ever seen Ghost before, this is going to be better. More of everything.”

Does the pressure of a new character and storyline make things more stressful?

“Yes and no. I think that for anyone who’s achieved any degree of success where there’s some outside expectation, sooner or later you’ll think, ‘I don’t want to not be successful, so what do people expect?” I don’t spend too much time worrying about that but if anybody tells you they never spend any time thinking about that, they’re lying. Of course you do. You don’t want to fuck up. So finding that balance can take a bit of time. But that’s one thing we had on this album — time. We’ve spent five months recording and that does make a big difference.”

Now for the million dollar question – when is the record coming out?

“It’s going to be out when it’s getting hot! It will be out sometime in the spring or summer. That would be my guess.”

The new Ghost album will land later this via Spinefarm