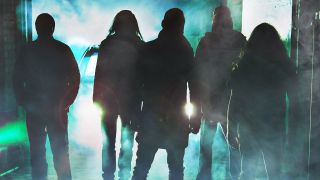 Horror connoisseurs Video Nasties throw their love of classic flight flicks and John Carpenter into a seething cauldron of brutal death, old-school grindcore, gritty black metal and goth rock to create a ferocious form of black'n'roll that plays out like the warped offspring of Mortician and Nifelheim.

Their latest track Hanging Tree, according to the band, "pushes further in the black n' roll direction. It's got a straight up mid/fast-pace rock groove and draws inspiration from the likes of Khold through to Iron Maiden" and was compared to Satyricon by Jeff Walker of Carcass.

Having such a passion for horror and an intimate knowledge with the worst situations humanity could possibly suffer, we thought we'd pick their brains to advise you on what films to binge during this time of unease, and if it comes down to it – how to survive not only isolation but a full blown apocalyptic situation...

Rick: "So this one seemed like a no-brainer to me but it could possibly be too close for comfort for some. Dawn Of The Dead (1978) is the ultimate zombie film in my eyes and thinking about it, it’s probably my favourite film of all time.

"The opening sequence is one of mass panic and hysteria not so different to what we’re seeing right now; an unknown virus reeking havoc and ripping through the population at an alarming rate.

"Tom Savini works his usual magic providing gory moments a plenty, including the infamous scene in which a biker has his stomach torn open by a horde of braindead freaks.

"I can actually imagine similar scenes happening over mega packs of Andrex Supreme Quilted in Costcos nationwide. Top it all off with a score composed by Italian horror masters Goblin and you have the perfect light-hearted blood fest for your COVID-19 themed Monday morning."

Rick: "My second pick is going to be Scream... these films came out while I was in school and I wasn’t a massive fan until fairly recently. They’re so cliché and cringe worthy but there’s a self awareness of this which makes them great fun, they’re almost a parody of themselves.

"I think it was missing the self awareness as young viewer that put me off the films first time around and I’m gutted it took me so long to give them a second chance.

"They are packed full of little Easter eggs and nods to all the classics too which adds to the charm and you could even say the franchise revitalised the slasher genre. I’d probably say Scream 3 was my favourite of the saga but as it has a running storyline I’m going to stick with the first one for this list."

Watch Scream on Amazon Prime for 99p with a Prime Membership

Damian:. If we’re gonna be stuck indoors for a while I’m gonna wanna watch a film that is of a suitable length. Originally a TV film but quite fitting is Salem’s Lot due to its bum numbing running time. One of my absolute favourites, as like a lot of my favourite horror films, one that I watched as a young child with my parents.

A true slow burner and when the scares come, they are dripping with atmosphere and dread. Despite David Souls haircut being very reminiscent to Terry Wogan’s wig you cannot deny Vampirism is a far sexier disease than coronavirus. Although it is easier to sing Covid 19 along to the tune of Come on Eileen. I used to love that song as a kid.

Damian: "Speaking of haircuts, check out the feathered Farrah Fawcett job on Kurt Russell in the classic Cold War paranoia fest that is John Carpenter’s The Thing!

"Often imitated (I’m looking at you The Faculty) but never bettered - saying that, I didn’t actually mind the 2011 prequel but it would have benefited from keeping the effects all practical like the 1982 version as the piss poor CGI was a little jarring.

"Some classic quotes from the film ‘yeah, fuck you too’... ‘I don't know what the hell's in there, but it's weird and pissed off, whatever it is’ and the classic ‘I know you gentlemen have been through a lot. And when you find the time I'd rather not spend the rest of this winter TIED TO THIS FUCKING COUCH!!!’.

"Pretty much a perfect film in terms of pacing, dialogue and scares. Absolute belter of a score from Ennio Morricone too!"

5. Wizards Of The Lost Kingdom

Dave: "Cutting myself off from the world and having a tipple or two would definitely go hand in hand with the mighty Wizards of the Lost Kingdom. This masterpiece is a must for anyone who has the time and patience to get through it!

"Sword and sorcery films made on a budget are always going to be entertaining, although it can be hard to know if they are meant to be comedic or not."

Dave: "Another film which would make fantastic viewing is Silent Rage (1982) staring Chuck Norris. I thought this was going to be predominantly a martial arts film, but it was actually coined as science fiction horror, and rightly so. The atmosphere and action are expertly intertwined with elements of horror. Having these factors mixed with Karate and 80's vibes makes for a good night in."

Stu: "The Shining is my first pick. The ultimate isolation movie. Elevators full of blood, a whole host of ghosts and a kid with telepathic powers. It plays out like a fever dream and perfect for if you’re on the couch feeling a little under the weather."

Stu: "Misery. Keeping the theme going here. Another taste of isolation from Stephen King with a more sinister twist. Kathy Bates plays an amazing role as a psychotic super fan in this claustrophobic thriller.

"Bonus pick for fans of Stephen King; Castle Rock, a series from King and JJ Abrams based on and inspired by characters and settings from the stories of King and his fictional town of Castle Rock. Packed full of mystery and little Easter Eggs."

Tommy: "Drag Me To Hell. Extremely underrated and misunderstood film by legendary Sam Raimi. Incredibly tongue in cheek yet still maintains some great jump scares and moments of unease. It absolutely reeks of Evil Dead in places and it gets a full 10/10 on the gross-out scale."

Tommy: "Another flick high on the gross-out scale is the 2016 Canadian supernatural horror The Void. Huge Carpenter vibes from this. It’s like a cross between The Thing and Event Horizon... It has everything from Lovecraftian monsters to occult gatherings and demonic possessions. Loads of fun with plenty of WTF moments.

The Void is available to watch now included with an Amazon Prime membership.

1.     When scavenging for supplies always travel in pairs. It’s always handy to have a spotter with you who can also get you out of any tight situations you might find yourself in.

2.     Always do you scavenging in the dead of night…less ‘walking dead’ around after midnight and your local 24 hour Tesco will hopefully be mid-restock.

3.     Be kind out there. This isn’t the Wild West. The arsehole in zombie films always gets torn to shreds in the end.

4.     Stock up on whiskey… it’s going to be a tough few weeks, you may as well be drunk while trying to stay sane.

Support the lads during this tough time by pre-ordering their forthcoming record Dominion on CD, vinyl, cassette and digitally via Video Nasties' Bandcamp