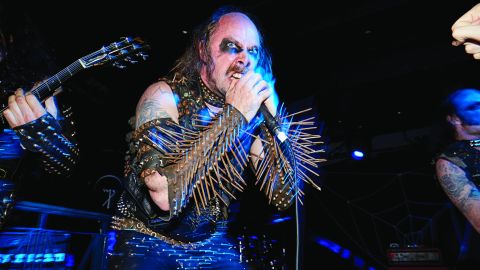 Of course one of the most anticipated gigs of the year would coincide with the hottest day of the year so far – outside the venue resembles Gomorrah-with-wrist-spikes and Maiden t-shirts. Some are handling the unseasonable heat better than others, however, and it’s a shame that for many punters, admission is delayed by the drunken oaf attempting to fight the bouncers. The calm and professional manner this to roboplegicwrongcock is dealt with ought to be commended, but the delay means too many catch too little of openers FUNERAL THRONE [6]. Which, as it turns out, is no great loss. With the air conditioners in the Underworld set to ‘Arctic’, conditions inside are at least more suited to the Black Country band’s frosty, high-bpm trad black metal onslaught. It’s not that the quartet do anything wrong tonight, but their attack is frustratingly static and rather meat’n’potatoes. Hometown foursome CRAVEN IDOL [7] fare a little better. Proving that humour hasn’t entirely departed the BM realm, the band’s soundcheck – full of miscommunication and probably the most hilariously frightening miccheck you’ve ever witnessed – coupled with their curious approach to corpsepaint that leaves them looking like a Satanic Adam & The Ants, at least gives the evening a little of what it’s missing. Their hugely thrash-indebted avalanche of shrill riffs and cauldron-cracking vocal shrieks, whilst solid, though, seem unnecessarily lugubrious. Looking like what might happen if someone in Royston Vasey formed a metal band, Swedish legends NIFELHEIM [9] are, by comparison, an utter revelation. They don’t like it when you accuse them of not being ‘serious’, but it’s hard not to vault headfirst into fun when confronted with a band who, tonight, inspire sonorous chants of ‘Nif-el-heim, Nif-el-heim’ after literally every song and who spend a great deal of their set waving bottles of Trooper in the air whilst praising Iron Maiden. This and their ludicrous, spiked and cobwebbed stage attire aside, there’s still nothing funny about the sheer, bloody-minded assault of early classics like Sodomizer and the epic closer, 2000’s The Bestial Avenger, which tonight are punched out with the burning intensity of a band half their age.