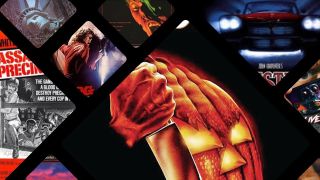 It isn’t hyperbolic to state that when it comes to the world of horror, John Carpenter is a legend. The director and mastermind behind dozens of classic horror movies, Carpenter is also probably the composer responsible for your favourite horror movie score. The foreboding strains of Escape From New York? They were him. The iconic staccato synth of the Halloween theme? Yep, that was him, too.

A couple of years ago Carpenter re-recorded his 13 most popular themes, aided by his son, Cody, and his Godson, Daniel Davies – of ‘son of Dave’ fame – and released them as shiny new compilation album Anthology: Movie Themes 1974-1998 and it quickly became a staple soundtrack to our Halloween.

Here, he talks us through each of the album’s classic themes track by track.

“Well, In the Mouth of Madness was inspired by Metallica and the Black Album. We wanted Enter Sandman for that and we didn’t get it so I just made it up and Daniel’s dad played lead guitar on it for me and it turned out great. My kids got me into [Metallica]. I wasn’t [a fan] before, I wasn’t even paying attention to them and all of a sudden they’re listening to it. I loved [the heaviness of] it all; the drama.”

“The main theme from Assault On Precinct 13 has two influences: one is Led Zeppelin, The Immigrant Song, and the second one is Lalo Schifrin and the Dirty Harry score, who I think borrowed from Led Zeppelin. That was just a repetitive piece. It really didn’t do very much, it was just very crude.

"The string part was a semi tone out of tune which I didn’t realise until later and it kind of made it creepier, being slightly out of tune. It was all done alone pretty much, except the guys who turned the machines on and recorded it, you know the engineers.

"I just did what I thought had to be done for the scene. That was my job, just provide the sound and the music for the particular scenes in movies. I had a great feel for the movies because I grew up watching them. Cinema was my first true love and it still is.”

“[The Fog] actually went through a couple of incarnations. The first portions of the score I did I threw out and went back and recorded something new to make it lighter, because the fog is light. The fog is kind of wispy and insubstantial, so I wanted something to go along with that.

"I remember everything [about making these themes]. Every mistake, every screw up, I remember it all. [The films we were working on] would be on a television set, we’d have the movie cut together on tape, I would sync up the synthesiser to the movie and we would just play along with it. I would just play track after track looking at the image and that was the best way I could do it.”

“[This] was a unique score and I’m really proud of that one. That’s some of the scariest music that I’ve done. The choral voices are fun, I loved those. The darkness of the piece. I can’t tell you who inspired the music but I know the movie Prince of Darkness was inspired by a Dario Argento film called Inferno.

"It was his freedom when he made Inferno, logical freedom. He said ‘nothing makes sense and I don’t care’ and I thought, ‘Oh that’s great. That’s real freedom’. There was a certain style going back to the 50s and 60s and it’s an Italian sound, I can’t describe it.”

“A movie called Rio Bravo has a piece of music that influenced that plot. Dean Martin, John Wayne and Walter Brennan were stuck in this jail and outside the jail the bad guys are having these musicians play a Degüello, which is what the Spanish played at the Alamo.

"Dimitri Tiomkin wrote a new version that’s not Degüello at all, but a version of it, so I wanted something like that for Vampires and that’s where Santiago comes from. And it’s also Western influenced. I was attracted to the science fiction and horror of the times [as a child], I just loved them – [some HG Wells], but I was most influenced by Lovecraft.”

“This was something I started developing on the piano. I started playing that theme months before recording it, and it was there, so I used it for the main title. Something bad is coming. It’s in the future and it’s bad…That was the main feel of it. [It was inspired by] Vietnam, [which] was the darkness at home. All the guys my age were afraid they were going to send us over to die. [I had a draft number] and I got out. I think that’s probably where it came from, the helicopters are Vietnam reminiscent machines. But really the inspiration was much more fantasy oriented. It was a combination of Death Wish the Charles Bronson movie which I enjoyed and this novel by Harry Harrison, Planet Of The Damned where the basic story is: it’s the toughest place on earth who do you send in? The toughest guy.”

“That was such a strange experience because that was a word of mouth movie, so it grew. Initially it was bad reviews and bad box office, but that movie grew and grew and grew by word of mouth. And I’m not sure when the music got noticed, but it was later. That’s the bongo story. My dad taught me 5⁄4 time and that’s where it came from. [I was] clueless, completely clueless [that it would take off].”

“I Just Got Paid Today by ZZ top – that’s the whole vibe of it. I love them.”

“The blues. There is nothing political about the music, but the movie was political. It is just this working guy who comes into Los Angeles looking for work and the blues is just the perfect thing for it.

"LA is like America – it’s everything you want, it’s down and out, it’s rich, it’s poor, the most beautiful girls in the world, the beaches, the mountains, the snow if you look for it. And the people – it’s got everything, it’s got crime, it’s got happiness, it’s got sadness. Everything you can think of.”

“We are playing Morricone’s main title. He wrote something as simple and minimal as the stuff I was doing because that’s what I wanted. I wanted something simple and minimal to go against some of the scores that were happening. And he did really lush orchestral stuff for me in that movie. I’m very happy with it.”

“Jack Nitzsche did it. A legendary character in the music business, was a session man and piano player for the Rolling Stones; he wrote a lot of early rock stuff. He was recommended by Michael Douglas.

"It’s a love story theme and we don’t have many of those, so we get to play that. My son had jetlag coming back from Japan, so he woke up at 4 in the morning and laid down the tracks, and we just cleaned it up a little bit and added various sounds.”

“[This] was Bernard Herrmann, oddly enough. My god that was a long time ago, I was so naïve and I hear it in the music.”

“All of my scores are informed by the Beatles and the Stones and the riffs and the sounds of that time. They are all informed from there. The movie had George Thorogood and the Destroyers doing Bad To The Bone as the title music and it had a lot of 50s music in it. I did the incidental stuff. And the Christine version is the incidental stuff I did made into a rock’n’roll song. It was just fun – the song has a real cool spirit to it.”