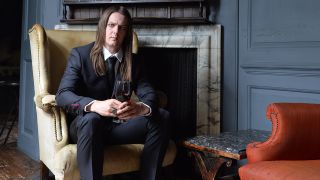 Sigurd Wongraven, aka Satyr, witnessed the underground birth of black metal. Metal Hammer asked him about living through its darkest times.

What was your first musical memory?

“The first record that I bought with my own money was AC/DC’s Let There Be Rock when I was eight. But long before that, my mother’s got pictures of me aged three-years-old sitting in a rocking chair with headphones, listening to – according to her – classical music. She said as soon as I managed to walk, I was able to operate the record player. I was in a trance-like state of mind when I was listening to music. I was not to be talked to, or distracted.”

What was your first exposure to black metal?

“Probably when I heard Bathory on regional radio in 1986. I used to tape those shows. There weren’t many outlets. I would buy Metal Hammer just for posters of my favourite bands – I couldn’t read English. But now any sucker out there is exposed to all kinds of shit and you don’t have to go and look for anything any more. People aren’t as driven as they used to be. I found black metal myself! There was no one to expose black metal to me, like here’s your free cover-mounted CD. In the late ‘80s/early ‘90s that’s when I started getting a relationship to black metal, not only as a musical expression but as a lifestyle, a culture.”

How did you first get involved with the people who became known as The Inner Circle?

“Meeting people at concerts. Mayhem’s legendary singer Dead committed suicide, and I met him selling Metallica bootlegs outside a King Diamond show in Oslo. I was into the whole fanzine thing. I think that would be Greek to most people today. But you made fanzines and people would go and sell them outside a show, hand out flyers for demos and things like that. Do tape trading. Today people communicate through email and message-boards but back then, in the underground, you’d write letters to get in touch with people and discuss music. Things are faster now and that’s good, but it was very charming, in a way.”

What kind of outlooks did you share? It was perceived to be a structured, political thing, but was it really just kids bonding over metal?

“It was certainly an extraordinary movement. It was a way of thinking, a way of being, a way of dealing with things that was highly unusual. It’d be strange for us to really deal with anyone else than those who were like-minded. Things were so extreme back then and so… unbalanced, because we were so young. Many of those things were good things, y’know? Many of those good things were as a result of the fierce drive you only have once in your life during your teens. But some of that seen in hindsight, and with mature and adult eyes, seems stupid. It was natural for us to keep it in our own circle because of the way we were, the way we talked and the way we dealt with people.”

Did you identify much with the religious beliefs prevalent at the time?

“They all said they were Satanists, and they had to go back on it. At no point did I ever say I was a devil-worshipper or a Satanist. Rather, the contrary, I said that it was too primitive and wasn’t my cup of tea, and that it was just religion organised in a slightly more loose way than other forms of religion. Many of those people weren’t really into it either, but pretended they were because Euronymous of Mayhem told them to.”

Burzum’s Varg Vikernes denied he was ever a Satanist.

“I used to like Burzum and still to this day I think that some of that stuff is good. He complains about not being mentioned in coverage of black metal. Well, Varg, you were the one that dissed black metal – and said you didn’t have anything to do with black metal and that you were never black metal!”

What did you make of those leading figures on the scene – people like Euronymous?

“I was in conflict with Euronymous. Euronymous tried to beat me. When he realised that he could not intimidate me or spin me round his little finger, when he just realised I was mentally and character-wise completely up for it, he gave me up and tried to win me over instead. The honest truth is I felt a lot of the stuff Euronymous was doing was quite idiotic. He would ask people to do things he would never dare to do himself. And he would do a lot of talking and very little action at times. But I have to say, he had really the gift of foresight. He said that everything that was special about black metal needs to be purified and kept sacred. That’s part of the reason why black metal became special and it became the phenomenon that it did. He knew that this would be something that would make an incredible impact, musically, culturally, philosophically – everything. If it was ruled with an iron fist and there was no room for opposers or those who were into it for the ride. He needed dedicated people. This was really extreme, that whole little group of people would shut down bands! Say, ‘No! Your band sucks! You’re not in this for real! Your band is history. We’ll make sure it is history.’ That kind of thing is really extreme but it did work! You have to give him some credit for that, y’know? I think there are certain bands featured a lot in the metal press in the UK that deserve the same treatment now.”

Where were you when you found out about his murder? How did you feel about it at the time?

“I remember really well. I was going to meet with Hellhammer, the Mayhem drummer, I picked up my mail on the way to the bus and there was a letter from Euronymous… saying, uhh… actually, that doesn’t matter. He sent me a letter. It was short but it was personal. And it was nice. It was a favour from him. He gave me some information that I needed to get and it was well meant. And that surprised me a little bit, because things had been a little tense. I called Hellhammer and he said they’d found him dead. It was extremely absurd and highly unexpected. And at the time I didn’t know what his enemies were up to whatsoever and didn’t have any contact with them, so I didn’t know there was any conflict that was that serious between him and anybody else.”

What were you like as a person in those days? You seemed very arrogant.

“I dunno, I was probably a little bit pretentious, like most other people at that time. Little bit immature. Due to age – I was young. I was unstoppable. And just completely unafraid of anything or anyone. Those are qualities that will take you a long way. It’s good to be able to look back and learn from your mistakes, but we also created some of the best music in the world. There were no record company executives there. We – the kids – did it. Alone. And we created something that had global impact, and we should be proud of that. We weren’t thousands. We were, like, 30.”

Satyricon are a band that is written out of the popular tabloid history of black metal. Presumably because you weren’t engaged in illegal activities?

“No, and that was a deliberate choice. Given that I live in a heathen country, where Christians have invaded my country, I can’t speak up against church burning. I think some people, for the love of their belief and the love of their country, did it just in the same way that people in Palestine do it – it’s their ground. I think it’s a very serious act. I just knew some of these guys might get away with some of it but we’ll all get caught! And that’s what happened. Those that murdered people they got their life sentences. But I knew that I had a musical gift, and I had so many things that I wanted to say and I still do. I never doubted in Satyricon’s musical abilities. I feel the music itself has more than enough capacity to speak volumes.”

You and Satyricon’s other-half – Frost – have been involved in each other’s lives for so long, you must be pretty close.

“Yes and no. I would suggest that there is some kind of invisible bond and tie that would make it so I would walk through fire, wind and ice for him, and he’d do the same for me, but also, uh… we are just so different. He is so introverted, and I am extroverted. We’re just contrasts. It’s just black and white all the way! But at the same time there’s this respect and understanding.”

How did you pick the name Satyr?

“It’s just mythology. Satyr, god of the woods, demon of nature, gifted musician – supposedly – half demon/ half man, decadent, hedonistic… all those things I could identify with.”

You once said that if you weren’t a musician you would have ended up a professional footballer.

“That’s just a silly dream of mine. I loved playing football as a kid. I’m still really interested in football. Maybe a Formula 1 driver? Those are fun things I could do but I think realistically I would probably be doing entrepreneurial work – someone who comes up with concepts that no one had figured out yet, where I could create things. I’ve done that before, I’ve made things happen and then had other people run the show on a day-to-day basis. That’s what I did with Moonfog [Satyr’s label].”

You’re one of the very few musicians from that original scene who still waves the flag for black metal. What specifically in the philosophy of black metal still appeals to you?

“I think man’s ability to look at his potential, rather than his limitations, is really important. Some people just misunderstood the concept and thought it was about hating and despising people for their weaknesses. Sure, you can do that as an outlet for your aggression, but what’s interesting is to see how far can you go yourself. How far can your mind explore? If you want to dive into the world of darkness, spiritually, how far down in the abyss can you go? Stuff like that. It’s not a game, you know. This is not role-playing. Some people don’t realise that, but for people who do, they can find it really rewarding.”

This feature was originally published in Metal Hammer issue 162.

Satyricon's new album will be recorded in a barn

Satyricon: Live At The Opera