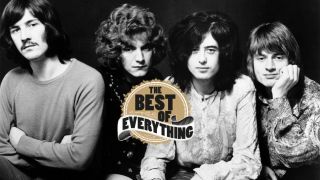 No Stairway? Denied! Feeder frontman Grant Nicholas has already revealed that Led Zeppelin rank amongst the bands that changed his life, so asking him to select a top ten was a challenge bordering on cruelty. “It’s tough not to include a songs like Heartbreaker or Rock and Roll,” he says. “But I’ve included quite a lot of riffy songs so I’ve tried to show the band’s incredible variety.”

Nicholas says that Zeppelin have remained an enduring influence on Feeder to this day, with the grandeur of Kashmir flitting around the back of his mind as he wrote songs like Universe of Life. He praises their variety and invention, especially when recording Led Zeppelin IV. “Technology is fantastic,” he says. “But there’s something about that era of recording before the 1980s which makes the records sound better to me.

“They sound more like a band – and back then you might have had one mic above a drum kit, or a microphone placed behind a drummer’s head, to hear what he’s hearing. The stuff that comes from those limitations can be quite hard to capture in today’s world. There are certain sounds that people expect to hear on radios. But as Led Zeppelin showed, there are no rules.”

“This is what makes Zeppelin so interesting and makes them so iconic: the dynamics and ability to play and write songs of so many different styles. This was a daring song to put out on your debut album, but the 1960s and 1970s was a very interesting time. Jimmy Page used the violin bow on the guitar when he played it live, and a theremin too. I tried to take a violin bow to my strings once, and Johnny Greenwood from Radiohead has done it and made it sound really cool. I don’t remember anyone doing it before Jimmy Page, though. I’m not sure if I’d dare to do it at a Feeder gig. I do use quite a lot of brushes on the guitar. Paint brushes, when I set lots of delays, going back even to Polythene. You can use all sorts. Once I used one that looked like a barber’s brush, for the back of your neck. It has to be quite wide though. Not a watercolour brush – more like something you’d paint the wall with.”

“This is a great track with a cool title. This was on their debut album from 1969, and you might have seen, at best, some black and white TV footage from their earliest performances with the band surrounded by really polite people sitting watching them. Jimmy Page had a really weird painted Telecaster which he used to play quite a lot, before his Les Paul days. It was green or had some weird-looking pattern on it. I think people associate him exclusively with the Les Paul or the double-neck SG which crops up later, but in this period he was playing the Telecaster more.”

“Everyone knows this riff from watching Top Of The Pops as a kid. Strictly speaking it wasn’t the original Led Zeppelin recording that opened the show, but whether you were into rock music or not, everyone watched Top Of The Pops, as bad as it was. Between this and Black Dog I’m not sure which I think is the better riff. Whole Lotta Love is a simpler riff, but a bit more groovy. Speaking as a guitarist I’d go with Black Dog. Then again, Whole Lotta Love is a bit more of a Sabbathy riff, which makes it even harder to decide…”

“The drums are awesome. I’ve always loved listening to this. It’s one of the best drum tracks John Bonham ever played. They did a lot of recording where the drums might be in the next room, which is interesting as nowadays you mic up everything, with your cymbals all going into different mics. They didn’t do half as much close miking in those days, and when you listen to the drums on Zeppelin it’s quite middly, it doesn’t have the very big bottom end that you hear on rock records now. It’s quite an unusual sound but so distinctive. Zeppelin definitely experimented, and the engineers and producers they were working with did a lot with placing microphones down corridors and having the drums far away. With the guitars too – a lot of Jimmy Page’s guitar sounds were miked from a distance to get the natural reverb.”

“Real classic Zeppelin which reminds me of being a kid again, jumping around the bedroom doing air guitar or hitting the pillows with drumsticks which I often used to do as well. I never ended up being the drummer but I loved rocking out. Black Dog is just one of those riffs, and it has such a great vocal on it as well. Plant, certainly in this era, his voice was on absolutely top form. I’ve heard the thing about ‘black dog’ referring to darkness and depression so there’s more to it than being just a throwaway rock & roll song, but as soon as you hear that riff it’s instantly recognisable.”

“John Paul Jones is a genius on this track, the way he’s doing all the bass using pedals. He just took up things and became a total multi-tasker, playing three parts in one go. How do you do that? They’re all so good but you can see him come into his own here. Personally I’ve got a few tracks where I might use Rhodes pianos and Wurlitzers or Mellotrons and that’s really influenced by bands like Zeppelin. John Paul Jones did it really well. I just loved it when he got on the keyboards and did the bass parts using the pedals. Here, it’s all psychedelic and quite soundtrack-y with a real 1960s feel.”

“Not really an obvious one but some of the musicianship on this track is absolutely mindblowing. This track is so exciting, with Page using his double-necked SG. I once picked one up and they’re really heavy! I considered getting one for Feeder as I have so many different guitar tunings. I thought, yeah, if I get one of these it’ll mean one less guitar change. I could get a double-necked Jazzmaster but I wouldn’t go for the twelve-string option, just two six-strings in different tunings. But they really are heavy. Having a normal guitar on your back for three hours is bad enough. I think Matt Bellamy from Muse had one but I think Jimmy Page pulls it off better – probably because of his dragon suits.”

“A classic intro, and I love the big ‘Aaaaahs’. I use ‘whoos’ and ‘oohs’ on a lot of Feeder stuff, and people connect with it. There’s a human element that people connect with. I don’t know what he’s singing about, but as an intro it’s just brilliant. There are some bizarre lyrics later on but I don’t care as it just takes you off on one and makes you want to rock your head. It would go brilliantly on Game Of Thrones. Robert Plant was into aspects of that fantasy stuff, and it works. When you’re a young kid you’re not often listening to every word that they’re singing and just going with the melodies. It’s only when you get older that you think ‘My god… what’s he actually singing?’”

“A more acoustic track which I used to try to play when I was younger. I always loved the more mellow side of Zeppelin, and this is one I’ll always remember. Houses Of The Holy is a great album, and this builds and gets quite grand. I probably like the more rocking side to the band overall, because they do it so well and John Bonham is such an awesome drummer. You don’t often hear his talents as much on the mellower side. But I just like the fact that they had folk songs, they had riffs from hell, they have songs which are epic. That’s the sort of band I always wanted to be in, a band that has the freedom to do what they want. There aren’t many who can pull it off but this is what makes Led Zeppelin one of the greatest rock band of all time.”

“Kashmir is an amazing song. Incredible, and amongst their absolute best. I remember when Puff Daddy sampled it for the song from the Godzilla movie, which probably made the song even more iconic because it reached people who didn’t know Led Zeppelin, people from the world of hip hop and R&B. And I’m sure Led Zeppelin weren’t too worried – I’m sure they made a lot of money off the back of it! Obviously I prefer the original, but I’ve heard worse use of samples than that. When I wrote Universe Of Life on the new Feeder album I had Kashmir in my head. There are some Zeppelin moments and you might hear those influences in there.”

Feeder are on tour across the UK this month. Their ninth studio album, All Bright Electric is available on 7 October.

Welcome Back: Feeder – "Finally, after 20 years, I'm happy with how I'm singing"