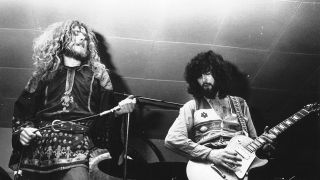 Of all their records, Led Zeppelin’s fourth album, released in late 1971, remains their most admired work. From Page’s unimpeachable riffs, through Jones musical invention and Plant’s clarity of vocal to that titanic John Bonham drum sound - Led Zeppelin IV still emits a freshness that belies its age. Here’s how we ranked its tracks from worst to best…

Led by an incessant Page riff and powered by Bonham's literal use of four drumsticks - hence the title, this was a difficult track to record which required many more takes than usual. The complex arrangement led it to being played live on only a couple of occasions.

The Led Zeppelin III album had showcased their acoustic side and this was another foray into fey acoustic territory. The hippy dippy flower kid lyrics may sound a little trite now, but back in the early 70s the singer songwriter soft rock style of the likes of Joni Mitchell was a big influence on Robert Plant.

6) The Battle Of Evermore

Plant came up with a set of lyrics inspired by a book about the Celtic wars and then Fairport folk legend Sandy Denny was brought in for the call and response lyrical theme of the song. They resisted playing it live until their 1977 US tour with John Paul Jones being handed the vocal duties. Not an easy task.

An uplifting outing, with Jones’ electric piano and providing the central riff motif the song revolves around. John Bonham makes an exemplary contribution, with some riotous fills. Plant meanwhile is back on the hippie trail telling the tale of being busted in the park with ‘crowds of people sittin' on the grass with flowers in their hair – hey boy do you wanna score?’

An instantly identifiable Zeppelin anthem. This track came out of a jam with Rolling Stones’ mentor Ian Stewart guesting on piano. Bonzo played the intro of Little Richard’s Keep A Knockin, and Page quickly added a suitable 1950s type riff. Fifteen minutes later, the nucleus of Rock And Roll was down on tape. A classic was born…

The almost impossible-to-copy rhythmic swing of the track (4⁄4 time set against 5⁄4) was a key indication of how far ahead of the rock game Zep were. Back in the day, bands such as Grand Funk Railroad were touted as being successors to Zep’s heavyweight crown, but their approach was devoid of the grace and timing of something like Black Dog.

2) When The Levee Breaks

This Memphis Minnie old blues stomper is led all the way by that much sampled, pummelling drum sound – created with one mic slung over the staircase in Headley Grange where it was recorded. Bonzo lets loose with a percussive ferocity which is matched by Page’s shimmering guitar work. Thunderous throughout.

Back in 1971 they knew this slow building opus was good, but they could never have dreamt the sheer commotion that this eight-minute epic would cause over the ensuing five decades. It’s been both loved and loathed in equal measures. Now of course after the LA court ruling in June, they can tell everyone that this is their song…