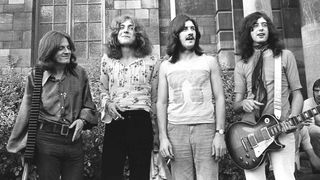 The Complete BBC Sessions is out this week. It features 32 tracks including the only known recording of Sunshine Woman, a lost Led Zeppelin song, while a bonus disc includes eight previously unreleased tracks made up of a ‘lost session’ that the BBC wiped from the archive.

Our radio special features the voices of Robert Plant and John Paul Jones, plus a new interview with Jimmy Page, in which he talks about the recordings, and how they helped in the band’s early days.

“The BBC had these little slots where you could go in and just record, in Maida Vale and at the Playhouse Theatre,” says Page. “You didn’t have a lot of of time to go in and present your music.

“Now, there had a been a programme prior it this called Pop Goes The Beatles, where There Beatles would go in and do their songs note-for-note, perfect. But for us this gave us the chance to go in and do a shorter number like Communication Breakdown, and then something like Dazed And Confused to show the kind of areas we were moving into as a band, which was far more experimental.

“Theses programmes gave us the opportunity for those tracks to be heard on the radio, and that’s what it’s all about.”

Listen to the entire show below, which features Communication Breakdown (One Night Stand), a cover of Eddie Cochran’s Somethin’ Else, Black Dog, Sunshine Woman, Immigrant Song, Travelling Riverside Blues (Top Gear), The Girl I Love She Got Long Black Wavy Hair, and Stairway to Heaven.