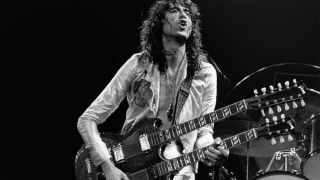 In a career that has spanned six decades, Jimmy Page has written the rule book on the art of rock guitar, from monolithic riffing to blistering solos, through acoustic beauty to vast instrumental guitar orchestration. Here’s the best of the best from the lord of the strings.

An early Zeppelin anthem and a prime example of the economy Page can bring to the table. The song itself has the sort of frantic quality that the punk rock movement would attempt to replicate a decade later. As for the solo, it’s short, sharp and incisive.

Page brings grace, finesse and style to the proceedings with a smooth tonal run at one minute 47 that perfectly complements the upbeat chorus. The ripple of notes he churns out for the second solo around two minutes 25 is also mighty fine.

This Presence track found a physically impaired Plant (he was recovering from a car smash) questioning their dubious on the road life style. Page’s solo is as vicious as some of the lyrical observations – a venomous affair that spirals out of the speakers. Never performed live in the Zep era, they attempted it for the first time at the 2007 reunion show – and absolutely nailed it.

Page can do bombastic, he can do blues, he can do 50’s rock’n’roll and he can definitely do guitar melody as well as anyone. The solo on this underrated gem is ample proof.

Page may have been taken a back seat to Plant and John Paul Jones in the recording of Zeppelin’s final studio album, In Through the Out Door, but on this strutting opening track, he stamps his authority on proceedings. The slamming door effect of the solo is yet another innovation. Washed up by 1979? Not on this evidence.

Page cleverly interweaves the riff across a series of acapella vocal lines and what a riff it is - a monster affair played in a manner that would baffle copyists for years to come. The solo he saves for the close is a beautifully constructed cascade of rippling notes.

Time has done nothing to diminish the pure adrenalin rush of the riff that ate the world. It leads on into a simply scintillating solo played out against Bonzo’s hammerings . For their 1979 Kenbworth appearances it was given a new lease of life - recharged, revamped and remodeled for the post punk era.

Drama, dynamics and dexterity are the ingredients for this flawless performance. An excited war cry of “Watch out!” from Plant is the signal for Page to let loose with a solo of awesome artistry. Always a live stage favourite, this was one of the undoubted highlights of the Song Remains The Same movie.

It was Page’s determination to turn adversity into triumph that ignited the entire Presence album. At the heart of it all is this extraordinary opening ten minute lament. The guitar orchestration is pure genius and the final outpouring of overdubbed majesty quite breathtaking.

Much maligned, in truth never bettered. As impressive as the studio version is, the live rendering from their Earls Court performance in 1975 is even better. Marvel at the entry of that solo as Page goes from madrigal to maelstrom with the switch of a guitar neck. Masterful.