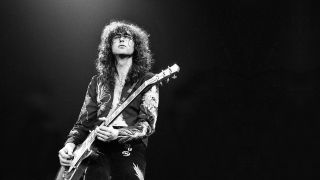 CHARLIE STARR (BLACKBERRY SMOKE): “I’ve thought a lot about this and you could definitely say the Stairway To Heaven solo is the greatest ever. That solo is put together almost like a piece of classical music. It has all of these twists and turns with it, much like the Free Bird solo does as well. Stairway is a very singable solo, which is very important to a songwriter. You shouldn’t just play mindlessly in a solo, you should also think about the melody. If you can look out and see people singing your solos then that is very powerful. I became familiar with this solo when I first started to learn to play the electric guitar. It was a piece of music that was so impressive on first listen. It was inspiring and I wanted to play it correctly. Me and all of my friends couldn’t play Eruption so we had to figure out how to play the Stairway To Heaven solo instead.” CS

Jimmy Page on that solo

We presume that Stairway To Heaven’s guitar solo came very near the end of recording?

I would invariably do guitar solos at the end, once the finished vocals and any overdubs were already on. Under the circumstances here, there’s a bass, an electric, 12-strings, recorders, a whole manner of things. I always put the solo on at the end because you’re really living the track by then, and being the producer you’ve already supervised all the overdubs that have already gone on.

I basically got my [Fender] Telecaster out to do that solo. Even though I’d been playing [Gibson] Les Pauls, I wanted to get that bite of the Telecaster on it. It was the same Telecaster that I’d played on the first album, the one Jeff Beck had given me that I’d used in The Yardbirds, a bit of a magical guitar, really. [Latterly, the so-called ‘Dragon’ ’59 Telecaster was rendered unplayable during an unauthorised, if well-intentioned, paint job. Its neck was salvaged and attached to another Telecaster – much played during the eighties – but its body was ultimately lost.]

The solo was done very quickly. In actual fact there were already layers underneath, the bottleneck you can hear was on before the solo. Anyway, I just said, ‘Roll it,’ took a deep breath, that’s what I usually do, and then go. I had a couple of cracks at it because you didn’t have as many options as you would have now. Back then you had 16 tracks and could only put guitar solos down where the vocal wasn’t. You’d save maybe three tracks to lay guitar solos into which meant you could have two or three cracks at it and then choose the best. It wasn’t something that was an all day thing and if I hadn’t have pulled it off that day, I would have moved onto something else, then come back to it. I worked out how I was going to actually come into it, the first two or three notes, but after that I didn’t work it out, I just played it.

It’s ad-libbed just as much as it would have been in any of the live shows. After the recorded version was laid down on record the solo would remain in a similar vein live, but not exactly the same. I was constantly changing it, like we did with all the songs. I’d stretch it and try and see what I could get out of it, kick it around a lot. That doesn’t mean I ever surpassed the one on the record. It is what it is and you can tell that it’s just flying, it’s not a laboured solo, it’s not something that’s worked out, written down and read. It’s more like a stream of consciousness.

Live, you used the double-neck Gibson EDS-1275 for Stairway To Heaven. But which came first: did you acquire the guitar so you could play the song, or arrange the song in the way that you did to accommodate the guitar?

I had an idea for a piece that was going to involve acoustic 12-strings, a layering of guitars and a 6-string solo and when I’d done it I thought how am I going to do it live? I can’t do it all on the 12-string, I can’t do it all on the 6-string. I’m never going to be able to showcase what the thing is about. It wouldn’t build properly. So, I got onto Gibsons to get a double-neck. Double-necks had been used before, but for me it was essential. It was the only way to be able to replicate Stairway properly.

It looked really cool, but appeared extremely cumbersome. Was it difficult to heft about?

Not really, no. There a picture of me holding it up in the air with one hand, so it was fine.

Do you consider Stairway To Heaven’s guitar solo to be your finest Zeppelin solo?

No, but it’s pretty damn good. If everyone else says it’s my best solo then that’s great, that’s good, but there are others that I prefer.

I’m not going to name them. I’m not going to argue with the public [laughs]. It’s a real thrill that Stairway has been voted and nominated here. It really honestly is. It’s incredible that the listening public still hold something that came out in 1971 in such great affection, because you do hope that your music is going to last.

It must be gratifying to be able to touch peoples’ lives in that way.

What was the first guitar solo that you fell in love with?

How High The Moon by Les Paul & Mary Ford. I was just dazzled by the Les Paul recordings and I think most young guitarists were. When I first heard How High The Moon I just thought, ‘Goodness gracious, what is that?’ because it was so radically different from anything else that was going on. His whole guitar arrangements and orchestration. And the solos were just amazing.

Did hearing Les Paul’s recordings pique your curiosity about the recording process and encourage you to attempt to replicate what must have sounded impossible?

It probably still is impossible [laughs]. I’d try to do home recordings to capture the spirit of what I heard. Specifically, what Sam Phillips was doing at Sun, what was going on at Chess, because I loved those recordings and the sounds they would get from the harmonicas. It wasn’t just about guitars for me, it was about groups.

Whether Presley with Scotty & Bill, Buddy Holly and The Crickets, Gene Vincent and His Blue Caps, Howlin’ Wolf and his outfit, the things that Muddy Waters was doing electrically. I was very interested in trying to recreate Little Walter’s harp sound. I got an old reverb unit and messed around.

Which is your favourite solo to play?

There’s no one favourite. I enjoy every solo I come up against, because each one I try and play differently each time. I never take it so easy that I could be playing along and thinking: ‘I wonder whether when I get back tonight I’m going to have fish and chips?’ I’m not one of those musicians. I’m really living it, right in the moment all the time, I always have been, and hopefully I always will be.

When I hear something like Since I’ve Been Loving You, where you extemporise at great length, I imagine you could get completely lost in the moment, close your eyes, forget where you are physically and just follow the music to where it takes you?

What, like a trance-like state? Absolutely, you’ve forgotten where you are through most of a set. I had a conversation once with William Burroughs about trance music and riff music, and repetition. Absolutely, that’s how it is.

Is there a solo that gives you a lot of trouble that you’ve been known to fuck up?

I don’t dread it, but the one that was testy, to say the least, to try and replicate, or at least to get a mean average of all the guitar parts on the record, was Achilles’ Last Stand. I really set myself a challenge to try and do that on stage with one guitar.

It’s nice to know that something gives you trouble. It’d be terrible for the rest of us if it all came easy to you.