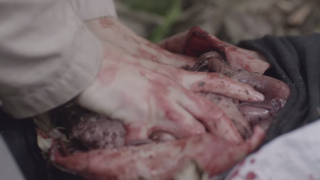 If you haven't witnessed the latest video from Rammstein frontman Till Lindemann and his side project with Hypocrisy's Peter Tagtgren, Lindemann, where have you been? Bizarre, explicit and bloody, the video for their single Knebel features full frontal female nudity, literal pussy eating and eels having their heads bitten off.

It might be one of the most NSFW videos ever but while there is plenty of gore and controversy our gruesome, frightening picks give Lindemann a run for their money when it comes to the fine art of the vile video.

So, take a gander at our putrid playlist of ten disgustingly out-of-order stomach-churners from the darkest corners of metal's imagination.

WARNING: This feature exclusively contains material that many people will find extremely upsetting, repellent, loathsome and offensive, but which is really smashing.

Banned just about everywhere, Trent Reznor and director Jon Reiss’ dark vision for this ritualistic mechanical flesh-ripping nightmare was inspired by classic sadomasochistic novels The Torture Garden (1899) and The Story Of O (1954). This literary backdrop, and the black-and-white cinematography, make this surely the artiest depiction of a bloke’s cock being torn off.

Cradle Of Filth – From The Cradle To Enslave

Cradle of Filth threw everything at their first promo clip: dental torture, lesbian bondage, deformed dwarves, girls slitting their wrists into a bath full of blood, tits, buckets of blood pouring over tits, stabbings, throat-slashings, dark religious allusions and Dani Filth being force-fed his own heart. It was directed by Alex Chandon, who later cast Dani in his 2001 straight-to-video horror Cradle Of Fear. This was better.

When Phil Anselmo was their guitarist, Ohio’s horror-death institution Necrophagia recorded several splatter-fests with maverick horror director Jim Van Bebber, released as 1999’s video collection Through The Eyes Of The Dead. First to impact is Blood Freak, laden with incest and entrails, building to the graphic mutilation and molestation of a naked female corpse.

It starts goofily enough, with the Californian Carcass obsessives belching blood and a camera panning across medical textbooks, but settles into a simple variation on the live organ transplant sketch from Monty Python’s Meaning Of Life, with forced extraction of guts, eyeball and tongue.

Stormlord – Under The Boards

Italian symphonic black metallers Stormlord promised “the most bloody, disturbing and sick metal video EVER!”, and had a fine stab with this medical psycho slasher that begins, like many of the best/worst Italian horror movies, with the stalking of a woman in a city at night and soon starts spewing entrails, sawing off heads and popping out eyeballs.

The thrashing Chicago barbarian trio have set up their gear in some desert ruins between a brutal (but cheap) Spartan sword-fight and a bunch of naked female vampire cannibals gorging greedily on the carcasses of fallen warriors. Inevitably in such an adolescent video the blood-smeared tits steal the show, despite some fun Pythonesque decapitations.

Some sexy lovemaking takes a horribly bloody, and maggoty, turn in this sick vid by Denver’s foremost ‘Rocky Mountain hydro-grind’ outfit. Bassist Nick Schendzielos says: “This has to be the most repulsive, disgusting, alluring, and captivatingly beautiful music video I’ve ever seen.” While director Michael Panduro quips “I think the final result shows the guts of the actors involved.” Stay tuned for the exploding stiffy.

“I wanted something mean and cruel and flat-out disturbing,” says vocalist Travis Ryan of this San Diego death/grind quartet’s Westboro Baptist Church-inspired genital mutilation fantasy. Director Mitch Massie describes it as “a complete audio/visual ‘fuck you’”, adding “I hope this isn’t the last time I get to do something this outrageous and awful.”

Rwake – It Was Beautiful But Now It’s Sour

Relapse approached Vice to premier the eleven-minute video from this Arkansas sludge sextet, explaining in a nutshell: “It involves dead pig foetuses getting absolutely annihilated in slow motion in every possible way.” An offbeat concept, but the protracted squashing and splatting of these spooky little sacs of goo makes for a grotesquely fascinating spectacle.

Job For A Cowboy – Tarnished Gluttony

Michael Panduro again, putting a chilling Lovecraftian spin on this death-doom epic by Arizona whizz-kids Job For A Cowboy, and going nuts on a breathtaking sequence where a man kills a child, pulls out his innards and replaces them with ghastly tentacled creatures before offering the stitched-up corpse to the ocean. So when’s the sequel?