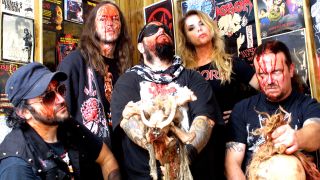 Heavy metal and horror have always been natural bedfellows, but no one has ever combined the two with such passion and intuitive skill as Necrophagia. More than 30 years on from forming in Wellsville, Ohio, the band led by Frank ‘Killjoy’ Pucci have returned once more to display their mastery of riff-driven gore and refined sonic dread on new album White Worm Cathedral.

It’s a tour-de-force of bludgeoning riffs, macabre atmospherics and stories wrenched from the shattered ribcage of arcane celluloid terror. This time round, however, gore has taken a back seat as Killjoy plunders his own shadowy childhood experiences for lyrical inspiration.

“There’s a reoccurring theme on this record, which is witchcraft and necromancy, subjects that have interested me since childhood,” the vocalist explains. “My upbringing is coming into it for the first time. My mother was very into witchcraft, and not your typical Wiccan hippy shit. As a child, she’d tell me not to mention the word ‘witch’ around my grandmother because she was very religious. My mother was a big inspiration to me. My musical career is winding down, but I figured I wanted to keep writing about things I know.”

With plans to make a wholesale move into directing his own horror films, Killjoy is determined to make what he regards as his last few years as Necrophagia’s creative dynamo truly count.

Bolstered by the scything guitarwork of latest recruit Abigail Lee Nero and augmented with some inspired ambient mischief from long-time cohort Mirai (of Japanese cult heroes Sigh), White Worm Cathedral is horror metal at its purest and most gleefully warped, replete with truly memorable songs that should delight metalheads whose nightmares resemble scenes from Suspiria or The Exorcist.

WHITE WORM CATHEDRAL IS OUT NOW VIA SEASON OF MIST