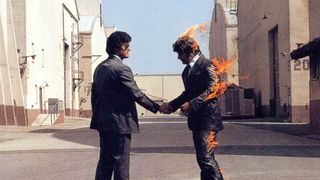 Pink Floyd\u2019s Wish You Were Here: one of the iconic prog rock album covers

Great album covers stand up as works of art in their own right, adding depth and meaning while also providing a springboard for the listener’s own imagination – and that goes double for prog covers. Much like the music it houses, classic prog album artwork pushes boundaries and sets new standards. Here are the 10 best.

Defining much of the sophisticated multi-layered visual language of the ‘60s and ‘70s, Hipgnosis thought nothing of flying out the desert in order to straddle an undulating dune with strategically placed footballs. Avowedly enigmatic, this line in the sand suggests an ephemeral monument to a band that was no more.

A turbulent universe unfolds above rows of oblivious, decked-chaired punters on the beach in Phil Travers’ epic meditation on the consequences of life in the Einstein age. Pondering apocalyptic threats, social unrest, unchecked industrialisation and rapacious capitalism, its ominous messages seems as relevant now as they were in the ‘60s.

Barney Bubbles’ interlocking die-cut sleeve employs sleek lines and art-deco retro-futurism to resemble a recruitment poster for Dan Dare’s Interplanetary Space Fleet on Hawkwind’s space-rock landmark. With the Hermes-like figure at the centre, implying an irresistible surge towards velocity and discovery, X most certainly marks the spot for this desirable item of extraterrestrial treasure.

Paul Whitehead’s forced perspective of a Victorian stately landscape is the perfect home for Genesis’ tall tales of decapitation, suicide and unnerving botanical stirrings. Real insects, captured after Whitehead varnished the original canvas, add to the pervading sense of underlying corruption and darkness in this disturbingly skewed fairytale England.

HR Giger’s xenomorphic creations are now firmly entrenched in popular culture. However in 1973 the world was entirely unfamiliar with his dystopic nightmarish visions, welding Man and machine together. The record company, unable to swallow the controversial sex act originally depicted on the die-cut cover of ELP’s Brain Salad Surgery, insisted it was airbrushed away.

Peeling away the black shrinkwrap originally concealing the album revealed complex layers of memorable, striking imagery resonating and plugging into the record’s dark, lyrical themes. However, the burnt-out case being welcomed into the corporate machine has become one of the most enduring and arresting images from Hipgnosis’ partnership with Floyd.

When King Crimson commissioned their friend Barry Godber to come up something for their debut album, nobody had any idea what to expect. With a frightening intensity, based on a hyper-stylised self-portrait of the artist, it heralded the music’s startling volatility and embodied the turbulent, schizoid spirits of the times.