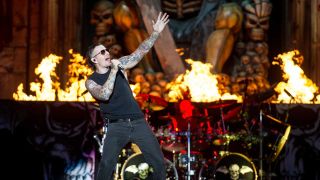 Metal power ballads prove that bombastic, emotional outpourings aren’t just the property of ‘80s cheeseballs: some of the biggest and heaviest metal bands on the planet have had a pop at epic love songs.

Here are the 20 best that’ll send your lighters into the air instantly.

The biggest metal band of all time have made a habit of producing some huge ballads during their career, but none can hold a candle to Metallica's first. A seven minute lament on suicide that set the template for subsequent epics Welcome Home (Sanitarium) and One, it melded brooding melodies with righteous metallic might.

Though the video for Seize The Day had Synyster Gates doing his best ‘Slash in November Rain atop a coffin’ impression, the ballad on the band’s Waking The Fallen is wrought with dark emotion and M Shadows’ huge, lighter-in-the-air choruses before building to an piano and string-laden finale. Arms being waved aloft is mandatory.

Not only is the title similar to Def Leppard’s awesome power ballad When Love & Hate Collide, but what better way to welcome Bruce Dickinson back into the fold than finish Brave New World with one of the Irons’s sincerest moments? If Bruce’s histrionic wail of “I will wait forever” doesn’t grip you, you officially have no soul.

Cowboys From Hell marked the band’s departure from their spandex-clad roots, but there was still enough of the ‘80s hair metal influence present to produce this colossal ballad. Phil Anselmo’s falsetto is at its stupendous best, while Dimebag lets rip with one of the most spectacular guitar solos ever committed to tape.

Killswitch Engage – The End Of Heartache

The kings of melodic metalcore made use of new frontman Howard Jones’ extraordinary voice on the title-track from their flawless third album. Putting a positive spin on the usual power ballad subject of sorrow, this helped heartbroken metalheads across the world get over breakups by singing arm-in-arm bloody loudly.

We’ve Come For You All was a mighty statement for the returning Anthrax in 2003, and while the tales of zombies and serial killers still kicked a load of arse, this mighty ballad saw John Bush and guitarist Rob Caggiano at the peak of their powers.

The Prince Of Darkness’ collaboration with co-writer Lemmy produced his finest ballad, which later reached special significance when he dedicated it to his wife Sharon while she was battling cancer. A delightful country melody gives way to an immediate chorus and a huge singalong along finale.

The eighteen-legged Iowan destruction machine aren’t averse to showing their sensitive side – see Vermillion, Dead Memories – albeit with a black heart ripped from someone’s chest. This lament from Slipknot's All Hope Is Gone is without a doubt their most melodic moment yet, but with Corey Taylor still delivering a message of venomous anguish.

A black metal power ballad you say? Stop sniggering back there, even Watain had a crack with They Rode On! Cradle Of Filth’s most romantic moment, albeit one soaked in the macabre, boasts the talents of Leaves’ Eyes Liv Kristine to form a lovelorn duet over soaring twin guitar lines.

When the power metallers aren’t playing millions of notes at twice the speed of light, they’re finding room for an arms aloft ballad to give their fingers a rest on stage. Replete with acoustic guitars, strings and a huge chorus their heroes Bon Jovi would be proud of.

Iced Earth – A Question Of Heaven

One of metal’s most underrated bands know how to write a stirring, emotional number as well as full-throttle anthems. The finale of a concept album based around the Spawn comic book character, this majestic epic of a tormented soul who prays for his own end is a full-blooded ballad that pulls at the heartstrings.

Thrash ballads rarely work – although Testament’s much-maligned The Legacy is an under-appreciated gem. Dave Mustaine’s best effort from 1994’s Youthanasia was so good he even rerecorded it again in 2007, with Lacuna Coil’s Christina Scabbia adding some sultry vibes and making a duet that rivals Meat Loaf and Lorraine Crosby.

Judas Priest – Beyond The Realms Of Death

Has all the prerequisite elements of a power ballad: soulful, light verses, a larger than life chorus and ostentatious guitar leads. Not only does it contain some of the finest individual displays from the members of Judas Priest, but Rob Halford’s triumphant “this is my life” chant is life-affirming stuff.

Don’t let the leather outfits, motorcycles, swords and true metal posturing fool you, Manowar love a good ballad. The connoisseurs’ choice is Kingdom Come, which sees Eric Adams out-wailing Whitney and Ross The Boss’s heroic guitar lines reach for the heavens. If you can pull off the sign of the hammer while holding a lighter in the air, you are a true Manowarrior.

Nevermore – Believe In Nothing

The progressive metallers had not one but two huge ballads on their Dead Heart, In A Dead World album, with this just shading The Heart Collector. Warrel Dane’s triumphant, rousing chorus and Jeff Loomis’ massive guitar lines will have you power-grabbing and air-guitaring throughout.

Aussie metalcore mob Parkway Drive would one of the last bands you’d expect to do a power ballad (except maybe Cannibal Corpse), but after spreading their wings on latest album Ire, Winston McCall took the plunge and penned this ballad for his beloved. There’s a little bit of singing over the acoustic guitars, but the chorus of “breath your life into me” is built atop a tune that’s still heavy as hell.

The greatest ‘90s ballad that wasn’t on the soundtrack of a Hollywood blockbuster contains the most moving guitar melody since Prince’s Purple Rain and trumps anything from prog metal peers Dream Theater. If there was any justice, this be everyone’s first wedding dance. Beautiful, brilliant metallic balladry.

With a chorus that starts “My heart belongs to you, my love is pure and true”, acoustic guitars, a string section and key changes throughout, this is a pure ‘80s heartfelt rock balladry about a guy who loves a girl and there’s absolutely nothing dodgy about it, at all.

One of the highlights of Trivium’s disappointing hotchpotch of a third album The Crusade, Matt Heafy and crew’s mightiest ballad is all the more remarkable when you consider it was written when he was only 20, when most people’s idea of a love song still involves skateboards.

Sure, they looked like transvestite brickies who gatecrashed a guitar shop, but the much missed Twisted Sister could ramp up the drama when they wanted to. Right up there with the likes of Thunder’s Love Walked In and Whitesnake’s Is This Love in hard rock’s greatest emotional moments.