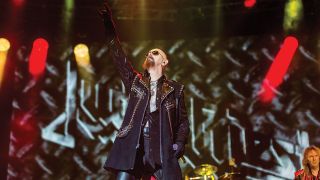 Do you remember the first time Priest were in Metal Hammer?

ROB HALFORD (vocals): “Yes! There’s a [German] Metal Hammer cover of me standing on the bike onstage with Priest in the early days.”

We’re celebrating 30 years – from Priest’s perspective, what’s been the biggest change in metal culture over the past three decades?

“Well, what we have seen from when we kicked off is the global force that metal has become. Name any country and you’ll find metalheads living there – and of course the many different styles of metal that there are now! As far as the in-fighting between scenes goes, that’s just a sign of the times, from our perspective. I hope it’s just banter, though I do think that younger bands can be just as cynical as older artists – music brings out a passion and a fervour, like how you feel about your football team!”

Could you ever have imaged how successful Priest would be?

“Not in a million years. We never took anything for granted – we worked hard and played hard and still do! Thousands of shows later, we are still grateful to our fans for giving us our life in metal.”

Why do you think traditional heavy metal made such a resurgence in the 00s?

“You can’t beat checking out the roots of any music – many bands still draw young fans to explore, and give you the true, organic vibes of what we make with our kind of music. And I think the scene is as strong as ever and showing no fatigue worldwide. There are so many bands I could spend my days checking out, but there’s a new Priest album to do!”

What advice would you give a band just starting out today?

“Do the same as we did – just go out and play; find an original approach and unique sound, or you will get lost in the rest of the shuffle. Enjoy yourselves. Love and support each other and, should you start to grow, keep it real – and always get a lawyer to check the smallprint!”

The Story Behind The Song: Judas Priest's Breaking The Law