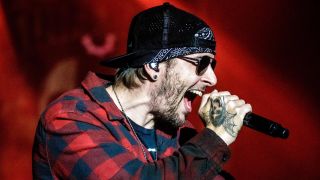 The last 12 months have been eventful for Avenged Sevenfold. Their huge world tour for The Stage went flying off the rails when the band had to cancel all remaining dates due to M Shadows’ vocal issues - though that didn't stop them from releasing a brand new song, the Call Of Duty tie-in Mad Hatter, as part of a four-track EP. While Shadows was busy recuperating, we got Hammer’s fine readers to interview him for us. Get set… go!

Why did you decide to release another single with Call Of Duty? Tammy (via email)

“We love the people working at Treyarch and we love their games. We also feel we can add something to the game by writing songs for them. It’s really fun for us to knock out a song or two for things like this instead of going through the whole process of writing a full album.”

Is there gonna be a sequel to Hail To The King: Deathbat Game? Ash Addisson (via email)

“I really hope so. We understand the original game has been taken down, but we have some announcements coming up soon. I have a ton of ideas for a sequel, maybe even make it multiplayer. Games are hard to make, just ask [Call Of Duty developer] David Vonderhaar. I compare making games to making albums: it’s very stressful! But if I ever decide to bring back Deathbat I wouldn’t want to give away any ideas…”

Hammer: How did you get into gaming anyway?

“My grandma bought me and my cousins the first NES. We got Mario and Duck Hunt, and I was addicted after that. At the moment I just finished the brilliant Black Ops 4 Blackout beta and now I’m going back to PlayerUnknown’s Battleground. Both are absolutely stunning games.”

What the hell is Mad Hatter about and how did you write it? Becky Peddar (via email)

“The song blends the narrative of the game and the life of John B. McLemore together in an interesting way. He was a brilliant man with an overactive brain and felt the struggle of society weighing on him deeply. People suspect that he had Mad Hatter’s disease, which eventually led to his demise. Listen to the S-Town podcast and the song will make more sense.”

Who would win in a fight, Steve Buscemi or William H. Macy? Nixon Vicci (via Facebook)

“What a great question… I honestly don’t know, but I would pay top dollar to see it!”

What tips do you have for people who want to write songs but don’t know how/where to start? Toni Reardon (via Facebook)

“Just jam! Take your favourite bits and build off that. Writing music is very tough. You start with a whole lot of nothing and are expected to create. Just remember that writing songs is hard for everybody… just work harder than everyone else and you should be fine. But writing an album can feel very daunting. I’m very hard to be around. My wife hates me and I become stressed out and insane. I’ve tried over the years to calm that down but I know at some point during the writing process I will have one or two breakdowns. We set a high standard for ourselves. With a one-off single it’s a lot easier. You can see the light at the end of the tunnel a lot sooner.”

How is your voice doing at the moment? Will you fully recover? Ids Schiere (via email)

“Thanks for asking. Yes, a full recovery is expected. I’m still taking it easy right now. Imagine bruising your knee really bad and you have to wait for all the swelling to go down before you can walk again. It’s not the type of injury that will affect you forever, it just takes a while to heal. That’s what I’m dealing with.”

Do you ever get writer’s block? Shomi Jayna (via email)

“I think before we start any album it’s always the first songs that are incredibly hard to write. Once you get in a groove, it makes things a lot easier. Before The Stage I knew what I didn’t want. I didn’t want over-the-top, cheesy choruses and I was sick of generic music. So for a couple months before we started writing I was just throwing out tons of riffs because everything sounded too generic. We needed to get a weird one out of our system. I’m not sure what the future holds, but I know we still get excited about ideas and albums. So with that, I’m sure some sort of writer’s block will happen as we search for the next answer.”

Since you’ve been on a break, have you had any sort of inspiration for the next album yet? Im Lit (via email)

“Yes, we have. But one thing I know for certain about the internet, though, is that if I told you what’s inspiring us, it would get blown out of proportion and we would have to see articles written about it for the next year. So, you can listen for yourself when you hear it in the future.”

Hammer: So does it really annoy you when us music press types might, um, blow things out of proportion?

“It annoys me when something cool or relevant happens and it doesn’t get written about. Then other times they will take one line from some random interview and blow everything out of proportion. Blind follow the blind. If one website picks it up then they all have to. Why not write your own articles? I wish the press and fans cared more about the songs than the other bullshit that comes along with it. A lot of records and bands are successful or fail based off of initial sentiment. For instance, you will see one article with a strong opinion on a band or album and then you see fans plaster that same opinion all over the place and it dominates the narrative. I wish people would think for themselves. There’s not a lot of that going on these days.”

“Piece Of Mind and Wasted Years!”

Are there any new bands you really dig at the moment? Jackson Ray (via email)

“Not new bands, but I love the new Bring Me The Horizon single, Mantra, and Tobias kills it on the new Ghost album. It all comes down to songwriting. Period. End of story. Tobias is brilliant and has made so many great albums. Truly one of the best of our generation. I feel Bring Me The Horizon are able to add modern elements to their music where I feel everyone else who’s tried has failed. I wouldn’t touch the EDM stuff with a 10-foot pole simply because I don’t know enough about it and it would sound cheesy. A band is a combined effort, but the bottom line is a song like Mantra is a monster and people can talk all day about that band, but they will continue to be huge because of their songwriting and innovation.”

Does online hate ever get to you? How do you guys deal with it? Nate Ward (via Facebook)

“No, the internet lost its bite many years ago for me. You can go on any artist’s YouTube channel or Facebook and copy and paste the comments. “New stuff sucks” or “I’m disappointed”, blah blah blah… Who cares? On the same token, when people are praising stuff, I don’t let that get to my head either. Do what makes you happy and ignore the rest. You live life once, and it’s a quick life. There is no need to stop and worry about what people think of you.”