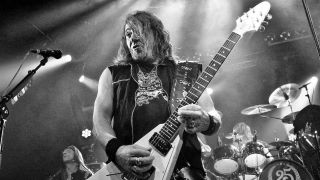 What Kai Hansen doesn’t know about German heavy metal isn’t worth knowing. Born 53 years ago in Hamburg, the guitarist/singer has helped to shape the worlds of speed and power-metal as a member of Helloween, Gamma Ray, Iron Savior and Unisonic.

Let’s get this show on the road…

After the Scorpions they were the next one to appear over the horizon. They are such an important band. Living and growing up in Germany I was lucky enough to follow them at just about every stage of their career. Fast As A Shark, Breaker… stuff like that – it’s impossible not to be blown away by that shit. It ended for me after Russian Roulette [when singer Udo Dirkschneider left in 1986], but they’re back [with former TT Quick frontman Mark Tornillo] and once again sounding really strong.

I was lucky enough to see Udo’s recent Accept-only show here in Hamburg. It was really cool.

As I was a co-founder of that band, I think I should mention them here. Hahaha! We came a long way together and they’ve gone even further after I left [in 1989]. They’re still there and still strong. It was a fantastic time in my life, and Helloween is a very influential band – or so people tell me. There were two very particular eras; the first one with me singing and the albums made afterwards with Michael [Kiske] and Andi [Deris] on vocals. I’m very happy to have been a part of that band.

And let’s have Gamma Ray in the list too, what a great band [laughs]. Since the first album [Heading For Tomorrow, 1990] we’ve had some nice success. I’m really happy and thankful to have seen my career carry on after leaving a well-known band such as Helloween – as we all know when you start something new that’s not standard practice. Just like Helloween, we’re still around and still doing our stuff.

Not to be confused with the American hair metal band of the same name, this Warrant came from Düsseldorf but never really made it outside of Germany, which was a shame. They played speed metal and had a really good vibe. They should be much better known than they are.

These guys are extremely important in the development of the German thrash scene, but I’ll be honest, we were on the same label and when Karl Walterbach [boss of Noise Records] signed them my reaction was, ‘What the fuck is this?’ It sounded like just a bunch of noise. Let’s just say I was proved wrong. They’ve gone on to do some truly great stuff and like so many of the bands mentioned here they’re still around. They’re still very powerful onstage, especially, but their recent material is also fucking awesome.

You can’t talk about German metal without mentioning Grave Digger. When I was in Helloween and recording in Berlin they already had one album called Heavy Metal Breakdown. Back then our paths crossed a lot, I heard them all the time and I really liked the song Yesterday.

They’ve been around since the early 1980s and made it to the top, and that’s not easy. I remember taking a call from their record company when they made the album Follow The Blind offering me a fine amount of money to be a guest. I requested to hear some songs and they were great, so we had a great time playing together and became good friends.

As the years went by their music began to absorb progressive elements. I’m cool with that to a certain extent. If it gets too progressive, I’m out. But they do just enough of it.

They have become very big recently, and I’m happy to say that. I still remember the time that little Tobi [Tobias Sammet] came up to me with his demo; he was always asking questions, you know, like Sesame Street – if you don’t ask you stay dumb. “How do you do this? What happens if I do that? How does this work?” I told him that the music was kinda cool – a little Helloween, a little Blind Guardian – and for a while it sounded like they were not so sure where to go. But I liked it all the same. I told him, “Edguy… what kind of a name is that? You’ll never make it by calling your band Edguy.” Once again, I was so wrong.

What can I say about Sodom? With around 15 albums to their name since the early 1980s, they’re a German institution. They’re not a particularly big band in the UK, you say? Well, believe me… here they’re a cult.

Destruction are yet another band from the early 1980s. They were on Noise Records too, so we also had that in common. They’re a thrash metal band, pure and simple. Real good, wild German thrash… they’re still there and still going strong. They’re absolutely great – if you don’t know them, check them out.

Kai Hansen’s debut album is out now, via earMusic.