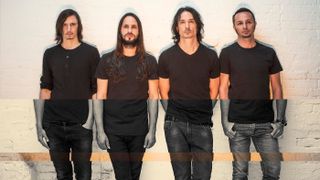 Proud bastion of liberté, égalité and fraternité France may be, but it doesn’t instantly spring to mind when you think of metal. Which is obviously way more important. Brazil, Norway or Sweden it may not be, but dig a little deeper, and France has a thriving extreme metal scene. By no means comprehensive, think of our list as a heavy metal channel tunnel, your gateway to a continent’s worth of extremity.

France’s progressive titans took it up a notch with this year’s Magma, simplifying their off-kilter crush into more palatable forms that by rights should make them as huge as they deserve. It is in the live setting that they truly shine; the band others fear to follow. Devastatingly heavy, impossibly tight, they have to be seen to be believed.

Pioneers of the current wealth of black metal-cum-shoegaze, the extreme roots of members Neige and Winterhalter lie in their idiosyncratically nasty former outfit Peste Noire. Evolving beyond the genre’s conventions has produced some truly emotive moments, forthcoming record Kodama perfecting their poignant formula of tender melancholy and life-affirming warmth.

Changing their name from Gorgasm to avoid clashing with a band of the same name, instead of… more obvious reasons, Gorod’s tech-death has evolved into increasingly progressive territories over the years, 2015’s A Maze of Recycled Creeds’ fervent blasts and melodious rhythmic dynamism putting them at the forefront of the future-minded.

Deathspell Omega’s intellectual black metal explored metaphysical interpretations of man’s relationship with higher, and… lower powers, on a trilogy of records, the last of which, Paracletus, was released in 2010. The trilogy’s second instalment, 2007’s Fas – Ite, Maledicti, in Ignem Aeternum (Divine Law – Go, Accursed, into Everlasting Fire) was released to critical acclaim and with good reason; the sound of your tortured soul tumbling down all nine staircases to the lowest circle of hell.

Year Of No Light

Avant-garde, post-rock, drone; call them what you want, Year Of No Light have never been considered a ‘proper’ band by its members, more of an experimental side project; but its one that continually bears fascinating fruit, earning the band invitations to Roadburn and Hellfest. The droning atmospheres of 2013’s Vampyr were written as an alternative soundtrack to accompany a 1932 horror film of the same title.

Formed out of the ashes of black metal band Antaeus, Aosoth successfully pull off the tough task of combining musicality and groove with a malignant atmosphere, 2013’s IV: An Arrow In Heart full of compositional dynamism drowning in an ashen mire. To listen to them is to feel the cold embrace of death’s skeletal hand.

Drum machines and doom don’t usually collocate, but try telling that to guitar/bass triumvirate C.R.O.W.N., who combine clinically precise electronic beats with the kind of depth-charged enormo-riffs that make sub drops sound like the piffling farts of a French bulldog. Somehow, the marching sterility of the beat makes the guitars all the more punishing.

With 2013’s Profane, Svart Crown gave Behemoth a run for their money as kings of blackened death metal, delivering severe intensity with disarming accessibility; satisfying your thirst for extremity and technicality within engaging songwriting. No mean feat, it garnered them deserved acclaim. They seem like a band destined for bigger things.

The Great Old Ones

Metal’s literary proclivities frequently venture into the dark waters of horror writer HP Lovecraft, something which Avant-black metal minions the Great Old Ones take to a logical conclusion with their unabashed hero worship. Named after ancient Lovecraftian deities, their dread filled environs pay fitting homage to ageless evil, 2014’s Tekeli-Li based upon Lovecraft novella At the Mountains Of Madness.

There really is some great black metal in France, Blut Aus Nord being another another shining example. Evolving over the years into increasingly high-concept territories, theirs is music constantly in search of new forms of expression which consequently, whilst requiring effort on the behalf of the listener to partake in the journey, is capable of taking your mind to far flung realms of glittering darkness.