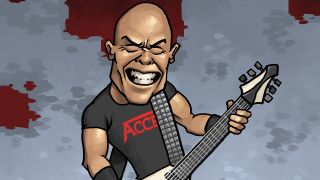 It only took five minutes to write

“When we write songs, 99.9% of the time we start with the music. But in this case at least, we just had that phrase, ‘balls to the wall’. It was noted by my wife, and our manager back then, Gaby, who wrote the lyrics and was responsible for album covers and songtitles. ‘Balls to the wall’ sounded cool, so we decided we needed to write a song with that title. I was sitting at home and suddenly I came up with the riff and the chorus. That was it. It took five minutes. I wrote it at home, put it on a tape and brought it to the guys at the rehearsal room and it took maybe another 15 minutes to completely work it out.”

We were worried that we’d stolen it

“When I wrote that first riff, I thought, ‘Does this already exist?’ It sounded so complete and right. It wasn’t something I sweated over for days and days, like I often do these days. I thought I must’ve forgotten that the riff already existed and I’d just stolen a song from somebody else! Thankfully, it didn’t exist, so it was a song that wrote itself. I suppose you could say that’s quite magical. It certainly doesn’t happen very often.”

It has become our anthem of rebellion

“It was all down to Gaby’s lyrics. She chose to make it an anthem against oppression. It’s really a political message, that one day the tortured will rise up against their oppressors. She’s always been a very politically aware person. Back then the band couldn’t write lyrics. We were just dumb kids from Germany, what did we know about politics? But Gaby wrote the lyrics with that political spirit and people really connected with it.”

“It was shot in London at an old abandoned factory near Heathrow. The director had a brilliant idea to use a wrecking ball and destroy a building. But there was a problem. We were so close to the airport and we had this huge lighting rig and generators… we got complaints from the airport control tower because it was so distracting! It was wickedly cold and we had to go out in the wind and rain to play. You can see it in the video, we were freezing our asses off! But you do what you have to do.”

Beavis and Butthead thought it sucked

“At the time I just thought it was a pretty good song, but the more we played it, we slowly but surely realised it was the winning song of the whole lot. It caused a lot of attention. We got a new record deal after that and we even appeared on Beavis And Butthead. They didn’t like the video and they took the piss out of us, but that was fine with us. It was an honour! Being on MTV was a big deal in those days.”

We never drop it from the setlist

“We’ve played it at every single Accept show since we wrote it. It’s always there, and it’s always the last song. Numerous times I’ve been blown away by the response. It’s been with us for so long and it’s lasted for more than a generation. People still love it. It’s one of those songs, it’s just so simple and easy to play. It’s no challenge, so when we rehearse we usually skip it, ha ha ha! We don’t need to rehearse it, we know it! But it’s one of the best songs to play live. You forget about everything, the audience kicks in and it’s amazing. The audience always goes nuts, and that’s why it’s still so much fun to play.”

Accept's Wolf Hoffman: 'Nobody knew how long this could go on for'