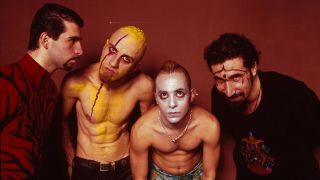 Even alongside the gang of misfits that came of age in the unruly era of nu-metal, System Of A Down always stood out from their peers.

Indeed, their eccentric mix of prog, thrash, hardcore, funk, rap and Middle Eastern music took the best elements of the sub-genre – angular riffs, odd time signatures and manic vocals – and twisted them into something even more strange and compelling.

Much like Faith No More before them, the Californian alt-metal crew would go on to infiltrate the mainstream and achieve multi-platinum success, and the five albums they released between 1998 and 2005 remain some of the most groundbreaking records in modern metal.

In an attempt to spur on the band with the writing of their sixth studio album (it’s been 11 years since the last one now lads, come on!), we decided to revisit their awesome back catalogue and draw up a list of their ten best songs.

Here, then, are the top ten songs by the utterly unique and always atypical System Of A Down…

Much debate surrounds SOAD’s third full-length release - is it a collection of b-sides/Toxicity outtakes or a studio album in its own right? Whatever the case, it contains some of their most interesting and diverse songs to date, the crown jewel being I-E-A-I-A-I-O with it’s anti-Klu Klux Klan allusions (“And we light up the sky”) and Knight Rider inspired breakdown. What other band would even have the nerve to tackle such scatter-brained ideas, let alone the conviction to pull them off?

This powerful anti-war track from their self-titled debut album is one of SOAD’s definitive political statements. The mysticism and eeriness in the music perfectly underscore Tankian’s lyrics of fear and mistrust, whilst the band’s exhilarating mix of all-out brutality and mindful restraint allow the singer the chance to show-off his insane vocal range in all its mind-boggling glory.

By the time they released their fifth studio album Hypnotize, the chaos and aggression that SOAD had built their reputation on was still present, but it was filtered through a maturity in the song writing. As a result, the songs were more intricate and dynamic, as perfectly showcased by the seven-minute rock symphony of Holy Mountains, which spellbindingly leads the listener towards the final reflective moments of their epic double album.

The first in their double album saga, Mezmerize marked the point at which SOAD shed their nu-metal skin and ditched the down-tuned guitars for an altogether cleaner sound, thus morphing into an all-round hard rock band capable of being progressive, original, accessible and brutal in equal measures. Violent Pornography is as crazy, catchy and heavy as metal music gets, and once again, with ridiculous lyrics like ‘It’s a non-stop disco / Bet you it’s Nabisco,’ you just can’t imagine another band pulling it off - it’s 100% unmistakably System Of A Down.

Sugar was the first single from SOAD’s debut album, and as such it introduced the world to the band’s unrelenting, schizophrenic, utterly bizarre aesthetic that as long as it didn’t have running for cover was sure to have you hooked for the foreseeable future. Tankian’s spitfire rap delivery is interspersed with vocal acrobatics ranging all the way from death metal growls to falsetto shrieks, all the while sounding certifiably insane, and in less than three minutes you knew heavy music would never be the same again. ‘SUGAR!’

SOAD’s second album came out the week of 9⁄11, and it felt more in tune with the scary post-Millennial era than any other album around. It was also arguably the first metal masterpiece of the 21st century, going platinum within six weeks and triple platinum within one year. It’s strange to imagine it now, but Toxicity was a major cultural phenomenon, and that’s entirely down to the strength of its material: the band refined and improved on what they’d done for the debut album, developing their mélange of progressive rock, thrash metal, hardcore punk, new wave and eastern influences, injecting added melody to create truly timeless anthems like Toxicity, which has lost none of its urgency or impact over the course of the last 15 years.

The second single to be released from System of a Down, Spiders sounds unlike anything else on the debut album, proving even early on that the band were capable of writing haunting melodies. The song starts off slow and soft before building towards its intense climax, its cerebral lyrics about dreams and mind control setting a dark and unsettling tone that contrasts completely with the bouncy absurdity of Sugar. The song also serves as a pre-cursor to Aerials, which is the next song on our list.

Cast in layers of aural complexity, Tankian’s metaphorical lyrics of mental emancipation unfold via the course of Aerials heavy verse / light chorus song structure that recalls The Unforgiven by Metallica. Indeed, this song marked the moment, as with bands like Black Sabbath, Iron Maiden, and Metallica before them, that SOAD became so successful their music was no longer part of the underground but part of popular culture at large. And the reason they followed in those footsteps of those bands to became one of the most popular heavy rock acts in the world was because they wrote incredible songs like this.

After two Grammy nominations (for Chop Suey! and Aerials) from the Toxicity album, the first single from Mezmerize actually won SOAD a Grammy Award for Best Hard Rock Performance in 2005. The single in question has also surpassed Chop Suey as their highest selling single to date, which isn’t bad going for a song as wacky and hyper-aggressive as B.Y.O.B. By this point, guitarist Daron Malakian was doing more of the song writing and he and Tankian shared lead vocal duties in many of the songs on the Mezmerize/Hypnotize double album, splitting them halfway down the middle. B.Y.O.B. is the perfect amalgamation of their twin vocals, not to mention an utterly flawless distillation of the band’s influences and styles, which shift effortlessly from R&B tinged pop melodies to extreme thrash metal with breakneck speed. It’s a fucking outstanding piece of music. But it isn’t their best song, because their best song was only ever going to be this…

Chop Suey! will forever be the song most synonymous with System Of A Down, which is great because it’s also the best song they’ve ever written. It’s a track so potent that it managed to become a radio hit in a post-9⁄11 world of censorship and political correctness, despite containing lyrics that openly reference suicide (we’d quote them here but you already bloody well know them like the back of your hand), and it still sounds like the future of metal today, even though its been on loop at club nights all over the world for the last 15 years – and not just the rock ones, either. We can’t even think about it without wanting to break into song, such is its contagious power to possess, so why fight the feeling? We’re off to lose our shit, and you’re invited to join us.