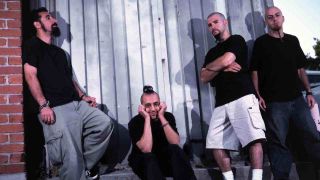 The increasingly tedious soap opera that is System Of A Down’s latterday career took has taken another twist after frontman Serj Tankian and drummer John Dolmayan posted radically differing political views on their respective Instagram accounts.

Both men had their say on the events unfolding in the US in the wake of the George Floyd tragedy – and specifically the role of US President Donald Trump in it all. In a post that began with the words, ““Run Donny run into your bunker”, Tankian furiously called out Trump as being unfit for office. By contrast, Dolmayan took exactly the opposite stance, proclaiming the President “the greatest friend to minorities.” Which could make things a little tense at the band’s next rehearsal.

That System Of A Down have found something else to argue about isn’t a surprise. It’s been 15 years since their last album, and around a decade since they returned from their initial hiatus. During that time, they’ve played a series of money-spinning tours, headlined festivals, teased us with the idea that a new album is coming, rowed back from that same idea, pointed accusing fingers at each other, split up again, got back together again, and generally expended an awful lot of energy arguing about who’s to blame for it all. In fact, it seems like the only thing they haven’t done is actually made a record.

Look, we know rock stars have their own viewpoints, whether that’s what constitutes a new System Of A Down song in 2020 or the relative merits of the current US President. It was exactly those differences, and the massive melting pot of ideas that came with them, that made System one of the most crictically-lauded bands of the modern metal era.

But somewhere along the way, they appear to have lost the ability  to meld those differences into a singular whole. Imagine what they could achieve if they channelled the energy they spent publically spouting off about each other into actually writing new music? Surely a record that tried to find a way of bringing Serj and John’s opposing viewpoints into the same space would be far more rewarding, and certainly far more interesting, than tweeting your thumbs red raw about why it isn't your fault there is no new System album?

This landmark band’s take on where the world is right now would feel pretty essential. But what do we get instead? More questions, more division, more confusion and more of the general sense that System Of A Down don’t really want to be here. This long without an album for a band that are meant to actually stand for something is embarrassing. If System don't want to make the step forward that everyone wants to see, then why the hell should we care about them?

The sense that they are dismantling their own legacy beyond repair grows stronger with every passing year. We can tolerate endless farewell tours from Kiss because they never claimed to be about anything other than rock’n’rolling all nite and partying every day. But System meant more than that – they stood for something. The men who railed against the Armenian genocide and cited political provocateur Abbie Hoffman as an influence would surely be ashamed of the endless nostalgia train their band has become.

The world would love nothing better than a new System Of A Down album. But the fact is that if we’re not going to get one – if the band really have nothing to say away from their social media accounts – then it would be more dignifed to knock it on the head and split up for good. Shit or get off the pot, guys. The metal scene is full of passionate, exciting young bands. One more half-arsed greatest hits tour won’t be missed.

But a phoenix can rise from the flames, and the members of System Of A Down can still save themselves. For the love of god, put down your phones and pick up a guitar, stop talking to journalists and starting talking to each other and make us all remember why we loved you in the first place.