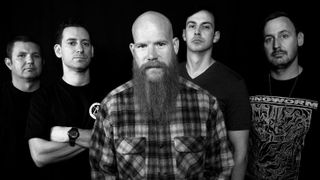 Metal Hammer recently counted down the 10 most underrated hardcore albums from Britain, but there’s no doubt that, in terms of popularity and sheer number of bands, the United States is the genre leader. That said, plenty of albums have slipped through the net, so we’re taking a look at the 10 most criminally ignored records from our friends across the pond.

One of the most controversial records in the history of hardcore. Straight-edge, metallic hardcore pioneers Earth Crisis were basically ridiculed for releasing what many described as a ‘nu metal’ album when Slither dropped. It almost cost them their career and their credibility, but listening back to Slither today the bouncy yet punishing likes of Killing Brain Cells and Nemisis sound way ahead of their time. Much better than you remembered.

9) Darkest Hour – Mark Of The Judas

Before metalcore became the sedate and oversubscribed sub-genre it is today, the idea of punk and hardcore bands borrowing big fuck-off riffs from metal’s finest was a piece of pure genius. And not many bands did it with the style and panache of Darkest Hour. Most people cottoned on to that when the metalcore dam burst a few years later, but take a listen to a For The Soul Of The Saviour and you’ll understand just how vital and furious Darkest Hour were at the turn of the century.

Shai Hulud have now gained mainstream notoriety from being the former band of Chad Gilbert (of New Found Glory fame), but listening to his current day job you’d have no idea that he made such unsettling and brutal music. Looking at the slew of metallic hardcore bands that dominate the scene these days, it’s hard not to wonder why Shai Hulud aren’t as revered as the NWOAHM bands that exploded a decade ago. HONWC certainly has the tunes.

7) Strife – In This Defiance

When Strife opened for Sepultura on their final tour with Max Cavalera in Europe, this type of music was still half a decade away from crossing over into mainstream metal territory. And the shrugs that greeted the band on that tour spoke volumes about how poorly hardcore was viewed by metal fans at the time. Years later, In This Defiance sounds like a real game changer, helping break down the walls between genres. It’s pretty clear where Hatebreed took many of their musical cues from, and by walking down a Strife-led path they, and the scene in general, reaped the benefits.

With frontman Kevin Baker now in All Pigs Must Die and original guitarist Neeraj Kane playing in hardcore supergroup Hesitation Wounds, it seems that at least some of the members of The Hope Conspiracy are finally getting their dues. Their debut album Cold Blue came out of the highly productive Boston scene that gave us Converge, Cave In, Bane and many more, but only now has the Hope Conspiracy name began to pop up regularly. The riffs and rumbling rhythm is something to behold, but it’s Baker’s frantic screaming that marks this out as one of the angriest albums of the time.

5) Death By Stereo – Day Of The Death

In many ways, Death By Stereo are closest thing that US hardcore has ever had to an eclectic, genre-splicing band like System Of A Down. Death By Stereo failed commercially, purely down to the fact that they were almost impossible to characterise. Day Of The Death melds whiplashing riffs, breakneck punk, odd time signatures and an almost salsa-style flair to create a wild and wildly entertaining album. The Fugazi meets skate punk meets Beastie Boys ride of Desperation Train is as good as music gets.

While SOIA have spent the last 30 years being one of the best live bands on the planet, and keeping New York Hardcore alive on their very own, they do tend to get somewhat overlooked when it comes to their recorded output, with only Scratch The Surface being universally lauded as a great record. In fact just about every album in their cannon is a banger, and one of the finest is 2000’s Yours Truly, featuring the brilliant, but unusual, Souvenir – essentially a campfire singalong with breakdowns that features drummer Armand Madiji on lead vocals.

3) Strike Anywhere – Change Is A Sound

The very nature of punk rock is to be raw, passionate and politicised. And while punk flirted with the mainstream at the turn of the millennium, and lost much of its bite, Strike Anywhere were one of the most reliable bands for old school fans at that time. Change Is A Sound is simple in its blend of highly articulated ideology and sweat-soaked three-chord punk rock. Listen to the way vocalist Thomas Barnett screams ‘Officer, I am not resisting you!’ in the brilliant Sunset On 32nd and tell us you can’t feel his frustration. All heart, no gimmicks.

For a very small period, it looked as though Avail were set to become the next band from the US underground to become mainstream superstars. An idea, to those of you familiar with the band, that would seem utterly ludicrous. Yes, musically they are melodic and anthemic enough to compete with any of the big hitter, punk A-listers from any era. But the resolutely DIY way they went about creating their music, the always honest subject matter and their flat-out refusal to make their music consumable means that it was always a no-go. Instead, underground punk fans can enjoy a set of songs like the joyous New Song or the self-explanatory Fast One in tiny venues, safe in the knowledge they should be far, far bigger.

The most underrated band in hardcore. Snapcase managed to merge Helmet-style liquid riffs with a progressive approach to classic punk. Progression Through Unlearning is a phenomenal record, full of distinctive vocals and guitar parts that became the band’s calling card in later years. Here though, the snaking guitar that opens Zombie Prescription (before levelling you with a massive beatdown) was totally unheard of in this scene. They continued to push the boundaries for over a decade, and all of their albums are worth your time, but Snapcase never sounded as fierce or original as they did here.

Which US hardcore records do you think deserve more attention? Let us know!