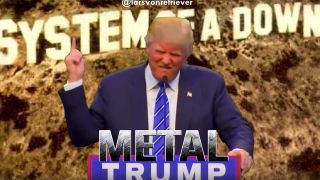 You never thought you'd see it, but here is President Donald Trump singing Chop Suey by System Of A Down.