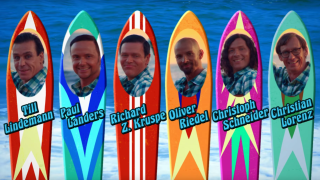 Aside from blowing everything up on stage and singing about sex a little too much, German juggernauts Rammstein happen to have made some of the most frightening, hilarious and artistically provocative music videos the world has ever seen from a major label band.

While there’s many brilliant Rammstein videos to choose from, we’ve narrowed it down to their best 10. A word of warning, though – they’re definitely not safe for work, all right?

Kicking this list off in true Rammsteinian fashion, Mann gegen Mann is unafraid to expose literally everything. The song’s loose translation is ‘man against man’ and that’s exactly what happens; biceps bulge and oily, sweaty, sexy pieces of bloke squirm in a scrum as the band play – naked, may we add – and we do get a brief glimpse of keyboard player Christian ‘Flake’ Lorenz’s penis at 0:31. Completely ridiculous yet completely necessary. In summary, then: oily.

Translating into ‘I hurt you’, it makes sense that Ich Tu Dir Weh’s video involved vocalist Till Lindemann getting wires fucking drilled into his fucking cheeks so he could have a flashlight inside his gob. Apart from ripping through a thoroughly cracking song, Rammstein used this video to basically preview the Liebe ist für alle da stage show; you’ve got Till’s shining light, but Flake’s treadmill, the rising lighting rig and the wonderfully gimpy outfits all make appearances too.

A retrospective clip made three years after the original Du Riechst So Gut video, this one’s heavily inspired by the film The Company Of Wolves which, in turn, was inspired by the wonderfully warped mind of Angela Carter. The band members follow a woman into Castle Babelsberg and flit between wolf and man throughout, which, with 1998’s graphics, is very charming indeed. The tapped mid-section riff has a masquerade ball dancing in double time and, overall, everything looks a bit like Sleepy Hollow but more metal.

A Rammstein hiking trip would involve dildos, boobs and fireworks going off in a small tent, right? Wrong. Fireworks in a tent would be dangerous. Instead, Rammstein trek through the countryside like they’re in a Volvic advert before ascending a giant, snowy mountain – they were trained by actual mountaineers to provide realism here. Till falls down the mountain, Touching The Void style, but the Rammstein lads go and save him! He gets gangrene but fuck it – he’s Till Lindemann. The band climb to the summit, Till in their arms, flanked by gorgeous panoramic shots of Austria only bettered by The Lord Of The Rings’ view of New Zealand. At the top, Till is content. He surveys all before him, takes a last breath and dies. For a Rammstein video, this is weirdly uplifting.

The band received much criticism for using clips of Leni Riefenstahl’s 1938 propaganda film Olympia in this video for their Depeche Mode cover. But, as the band explained, they admired the aesthetics of the athletes and were quick to disassociate themselves from the German filmmaker’s politics. As per with Rammstein, there are sections where people are, er, stripped. While doing throwing the javelin and discus.

You want Hawaiian shirts? You got it. How about guitarist Paul Landers giving you a creepy, ‘70s TV presenter thumbs-up? Done. Till Lindemann sprinting down the beach, Baywatch style? Of course that’s here for you. Sun cream is applied, everything gets increasingly pervy and this tongue in cheek clip finishes in the dead of night, with the band literally firing on all cylinders with their live show. But on a beach.

Some things will irreparably damage you for life. Seeing the Sonne video as a child is one of those things. Watching the band – as dwarves – dig for gold in a putrid mine, beg for a giant Snow White’s approval and, in turn, get spanked for it is a perfect example of how Rammstein can take a classic fairy-tale and twist it to suit their own sadomasochistic needs. Lovely.

The ultimate heist. The whole video is an iconic example of why Rammstein are great; the band walk away from explosions while looking impossibly cool and, backed by the undeniable tune that is Du Hast, you can see why this is the single that made a legitimate big deal of the band. But it’s that first-person segment, when you’re immersed in the action and Rammstein start hitting you. It’s like you’re in A Clockwork Orange or the bit where Project Mayhem threaten to cut that man’s cock off in Fight Club. Bold, bullish and 100% deserving of its success.

Proof that Rammstein’s artistic vision hasn’t shrivelled one bit with age. An acoustic reworking of 2001’s track of the same name, Mein Herz brennt features a solitary Till in a red room, clad in a black dress, clown make-up smeared over his features and lacerations across his chest. He performs backed with only a piano, the track bubbling at the surface but never boiling; Till gives the performance of his entire career, holding the viewer’s attention for five minutes with subtle gestures and genuinely scary smiles and facial tics. Transfixing and deeply disturbing.

It was always going to be Mein Teil. Documenting the ethically questionable escapades of Armin Meiwes and his chum Bernd Jürgen Armando Brandes – they mutually agreed to chop off and cook Brandes’ penis before Meiwes killed him – this is a chilling document, especially with the sound of knives being sharpened at the start that’ll make your legs cross instantly. Loads of weird shit happens; Till gets a blowjob from an angel and eats her wings, but the most memorable set piece comes at the end, when drummer Christoph ‘Doom’ Schneider dresses as Meiwes’ mother and walks the rest of the band on leashes through the streets. The song and video caused controversy across the world – especially in the band’s homeland – and just doubly reminded us that Rammstein will always do what they feel is right for them and their audience. Never compromise, never surrender, always provoke.

For more on Rammstein and the men who helped create their videos, then click on the link below.

Rammstein: "They Drank And Flagellated Themselves, The Blood's Real."