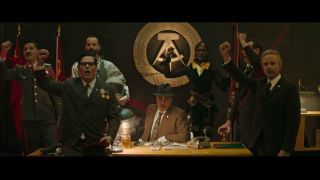 If you're aware of German alt-metal legends Rammstein, you probably know two things. One, they love setting fire to things, and two, they love sending people into panic with their graphic music videos.

Never have they made the latter point more clear than with the release of their recent Deutschland single and its accompanying video. Including graphic scenes based around German history – with direct references to the horrors experienced by prisoners in Nazi Germany's concentration camps – the video caused significant public upset upon its release.

Elsewhere in their canon, whether it’s eating the wings of an angel or a sexually perverted Snow White, there’s a lot to take in from the German masters of industrial chaos.

It’s not for everyone, and some of you might find the below videos offensive, but these are the most controversial videos that Rammstein have ever created. Consider yourself warned.

The band’s Depeche Mode cover stirred up real problems for them when they used footage from a film called Olympia. Made in 1936, this was a documentary ostensibly about the 1936 Olympic Games, but was actually done as propaganda to celebrate the superiority of Nazi youth. Made by Hitler-approved director Leni Riefenstahl, there was so much anger about what Rammstein had done that Jewish organisations wrote in protest to the band. In fact, such was the focus on this part of the video, people actually overlooked the fact that the band appeared nude in it.

Now, here’s the way to film a fairy tale. This video features the band as dwarves all working for Snow White – except that she’s addicted to gold dust and the dwarves all have perverted sexual obsessions about her. The idea came to the band after they watched the animated Disney Snow White film while Sonne was playing in the background; they even tried to mix the song into the Disney footage. The band actually tried out several different ideas before settling on this storyline – one of the abandoned plots was about the dropping the atomic bomb on Hiroshima. No controversy there, then.

This was based on the sensational Armin Meiwes case. He killed and then ate a willing victim, whom he found on the internet. And the act was captured on video. Obviously. What Rammstein offered was so sick that MTV Germany refused to show it before 11pm. The clip sees Christoph dress as Armin’s mother, while Till Lindemann is given a blowjob by an angel. He then eats the wings and kills her. The entire band are then shown fighting in a mudpit, before five of them are filmed crawling out of a subway, while being held on a leash by Christoph. Wholesome entertainment.

In true Rammsteinian fashion, Mann gegen Mann is unafraid to expose literally everything. The song’s loose translation is ‘man against man’ and that’s exactly what happens; biceps bulge and oily, sweaty, sexy pieces of bloke squirm in a scrum as the band play – naked, may we add – and we do get a brief glimpse of keyboard player Christian ‘Flake’ Lorenz’s penis at 0:31. Completely ridiculous yet completely necessary. In summary, then: oily.

Filmed in Malibu, it shows the band wearing 60s-style beach clothing at a beach party. Then the video cuts to 2012, when the band are shown playing on the same beach, only this time they’re in more industrial clothing, with flames shooting out from all parts of the stage. Oh, and just to get the moral majority fuming, there are women shown topless. Not as OTT as some videos, but it still has a mirthful perversity. Nice one.

The follow up to 2009's Liebe ist für alle da has been a good 10 years in the making, so it follows that when is came to releasing the first video from their upcoming self-titled album, it was going to be something sensational. What we got was Deutschland, a song that explored Lindemann's feelings of guilt and shame about his homeland's history and a video that explored some of Germany's darker historical moments.

As well as scenes where hungry monks rip flesh (depicted by sausage and sauerkraut) from Germania's body, there's the now infamous Holocaust scenes, set within a replica concentration camp. The scenes caused outrage among many who questioned the band's motives for including the intentionally shocking footage, with the German government's commissioner for anti-Semitism dubbing it a "tasteless exploitation of artistic freedom", while former president of the Central Council of Jews in Germany felt that Rammstein had "crossed a line".

If you're interested, you can read our full breakdown of what the fuck's going on in the full video.